Kiersey Clemons to return as Iris West in 'The Flash'

Kiersey Clemons is returning to "The Flash" as Iris West, the love interest of the title character. File Photo by John Angelillo/UPI | License Photo

March 11 (UPI) -- Kiersey Clemons is set to reprise her role as Iris West in DC's upcoming The Flash movie starring Ezra Miller in the title role.

The Hollywood Reporter confirmed the news Thursday stating that Clemons has closed her deal to appear in the film.

The Wrap also reported the news, citing a source with knowledge of the project.

Clemons was first cast as Iris, the love interest of Miller's Barry Allen/The Flash in July 2016 when the film was being helmed by director Rick Famuyiwa. The Flash has gone through multiple creative teams with It director Andy Muschietti now at the helm.

Clemons was originally first set to appear as Iris in 2017's Justice League, but her scene with Miller was cut from the theatrical version of the film, which was directed by Joss Whedon.

Zack Snyder was the original director of Justice League and dropped out of the project due to a family tragedy. Snyder has restored the Iris scene in his new version of Justice League, which comes to HBO Max on March 18.

Actress Candice Patton currently portrays Iris on The CW's Flash series. Iris is a journalist and friend of Barry who eventually falls for the Scarlet Speedster.

The Flash is set to hit theaters on Nov. 4, 2022. Production will begin in April in London.

The Flash will feature Miller traveling through different dimensions where he will meet different versions of DC's stable of characters.

Both Michael Keaton and Ben Affleck will be reprising their roles as Batman in the film. 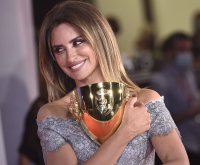