Liam Neeson was at a Friday night screening of his film, "The Marksman," as the AMC Lincoln Square theater reopened in New York after nearly a year of being shuttered because of the coronavirus pandemic. File Photo by Christine Chew/UPI | License Photo

March 6 (UPI) -- Actor Liam Neeson celebrated the reopening of New York City movie theaters with a personal appearance at a screening of his latest action film, The Marksman.

To mark the occasion, Neeson attended Friday's 7 p.m. screening of his film at the AMC Lincoln Square theater in Manhattan, Deadline reported.

"Coming to a movie theater for me is like coming home," Neeson told the audience. "I find it sacred. That feeling has never changed."

People.com published a photo of the screen star wearing a black face mask and holding a microphone as he spoke.

In an interview with The Hollywood Reporter before the event, the 68-year-old actor said he has gotten the first shot of the two-injection coronoavirus vaccination and was eager to greet moviegoers venturing back into cinemas.

"This is one for the diary," Neeson said. "It will be nice to welcome people."

As of now, capacity is limited to 25 percent or no more than 50 people per auditorium in New York City movie theaters.

Film studios have delayed the releases of many of their biggest movies -- or adopted hybrid strategies consisting of home entertainment and theatrical releases -- until cinemas in New York and Los Angeles are back in business. 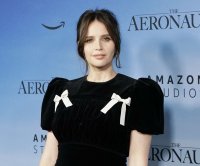