Last week, Pfeiffer earned a Golden Globe nomination for Best Actress in a Comedy for her portrayal of Frances, a New York socialite who loses most of her money and moves into a friend's Paris flat with her adult son Malcolm (Lucas Hedges) and their pet cat Small Frank, who may be her reincarnated husband, voiced by Tracy Letts.

Set to debut in theaters Friday, the movie was directed by Azazel Jacobs. Patrick DeWitt wrote the screenplay based on his novel.

The tone of the film may be summed up with a memorable line of dialogue Frances acidly delivered when asked what her financial plan was.

"My plan was to die before the money ran out, but I kept and keep not dying and here I am," she said.

Lines like that rang true to Pfeiffer, whose films include Murder on the Orient Express, The Age of Innocence, Batman Returns and Grease 2.

"I have found in my life, the most dire situations are sometimes when people are at their funniest," the 62-year-old actress said during a recent virtual press conference for the New York Film Festival.

Pfeiffer said the characters DeWitt created were fully fleshed out and never felt like caricatures.

"It's this odd world filled with these odd people," she said.

Pfeiffer paraphrased Jacobs as saying the people at the heart of the story were like strangers marooned on an island, who end up finding each other.

"I had friends who grew up in this world: these New York socialites, the elite. I grew up in Orange County, Calif. So, I always felt weirdly outside -- especially when they all got together -- and I somehow always felt pedestrian when I was around them," Pfeiffer said.

French Exit brings viewers into that world and shows how people behave in the face of adversity is subject to their specific circumstances.

"You realize that we are all really living in our own little bubble and, depending on what bubble you grew up in, you develop certain survival skills and they are different depending on what your experiences have been," she said.

Hedges knew the project was special as soon as he read the script.

"I've just fallen in love with stories and worlds and the different rules that accompany them. I had a very distinct feeling that this is a world that I love and a voice that I love," the 24-year-old actor said.

The Manchester By the Sea and Boy Erased star said he had lowered his expectations recently because of what he called the diminishing quality of scripts he has been reading.

"It was clear pretty early on that this was completely different," he said of French Exit. "I was really taken by the ways in which the characters thought and spoke."

Hedges credited Jacobs with getting him out of his own head and putting his best performance possible on the screen.

"He's such a humanist director and artist and was a great complement to my overly neurotic brain," Hedges said. "Sometimes I can approach things from the outside in and he always brought me back down to Earth with his heart and his ability to say, 'When have you felt like this before?'"

The artists involved in French Exit said production went fairly smoothly with a few hiccups along the way.

Footage had to be reshot because Hedges shaved his facial hair after deciding to approach the scene from a different direction without first clearing it with Jacobs.

"I was a bad boy for it," Hedges laughed, assuring that his director didn't make him feel guilty about the choice, but explained it was the wrong one since it messed up the film's continuity.

"We shot this scene that we then had to reshoot it because I had to grow back my facial hair to match it."

The delay was actually fortuitous, Hedges said, because it bought him more time to understand what his character was thinking and feeling in that scene.

"When we got to shoot it again, I was grateful because I felt like I belonged in the moment," Hedges said.

Pfeiffer recalled another day early in the filming when the cast and crew were bedeviled by technical glitches, troublesome lighting and a tiny space in which to work.

"The worst thing for an actor is you feel like you are getting there -- wherever that is -- and then you shoot and you are riding that crest and it's happening and then a plane flies over or a dolly creaks or somebody sneezes or something happens and it disrupts your momentum. It was one of those days. It was a constant having to get back [to where we were,]" she said.

Jacobs learned a lot from working with the feline "actors" who played Small Frank.

"It turns out that a cat works on its own time. We were trying to get the cat working on our time at the beginning," the director said.

A wrangler ultimately explained to him that if he let the cats make themselves at home on the set, he would be able to see what they did naturally and plan how to film them.

"Then the cat would be ready to do it," Jacobs said.

Movies // 1 hour ago
Franka Potente wants 'Home' to reflect 'brutality vs. tenderness'
LOS ANGELES, Dec. 3 (UPI) -- Franka Potente, who made her feature film directorial debut with "Home," in theaters and video-on-demand Friday, said she was inspired by the beauty and brutality that can exist within the same person. 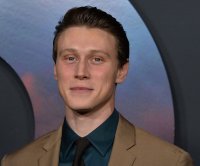 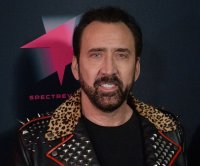