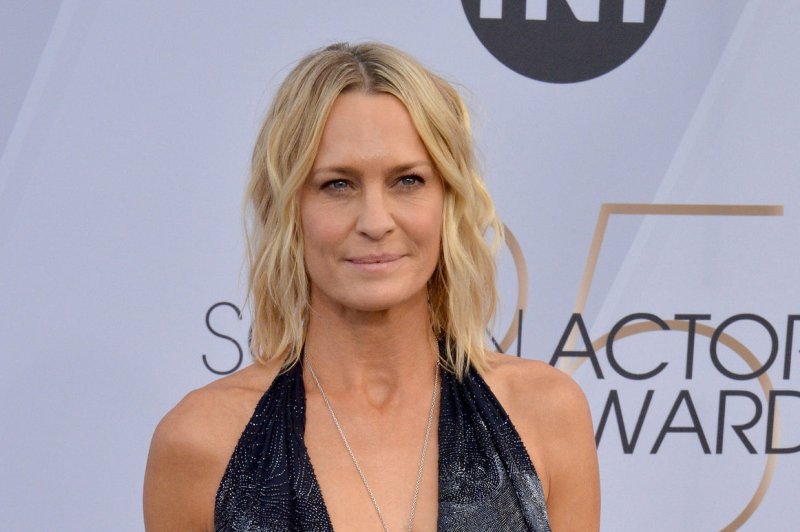 LOS ANGELES, Feb. 1 (UPI) -- Robin Wright says she was inspired to direct the film Land, which premiered at Sundance on Sunday, by the spate of mass shootings in America.

In the film, Wright plays Edee, a grieving woman who moves to Wyoming to live in nature.

"It's having to erase yourself because the self you knew will no longer exist," Wright said at a Zoom Q&A following the screening. "It's about resilience and hope and the kindness of others."

Wright had not intended to play Edee. However, there was only one month in which they could film Land in Alberta, Calgary, to double for Wyoming. Rather than engage a casting search, Wright decided she could be ready in time to film.

Wright thanked Dr. James Gordon and Dr. Mary Ann Tyson in the credits of the film. She said she spoke to them to gain insight into how her character, Edee, might be processing grief. The doctors shared their observations about the stages of grief.

"They were very instrumental in helping me feel the vibe of this movie, of rebirth, of resilience," Wright said. "You can get through. There is light at the end of the tunnel. Don't give up hope."

In Land, Wright chose not to reveal who Edee lost and how until the end of the film. Wright said the original script specified the circumstances earlier, but she discovered in editing that she could wait.

"We just felt that we could hold," Wright said. "We could let people go on this journey without knowing until the very end."

Performing the most extreme moments of sadness was trying for Wright. As director, she decided one take was enough.

"Each of those angles was one take because I dried up after," Wright said. "I can't cry anymore. I don't want to feel that anymore. That was it. That was all she wrote."

When Edee first gets to Wyoming, she struggles to deal with the wildlife, find enough food to survive or enough wood to make a fire. A local man, Miguel (Demian Bichir) teaches her to fish, hunt and chop wood.

Wright said she was impressed with Bichir's performances in A Better Life and The Hateful Eight. When she met him, Wright felt Bichir embodied Miguel.

"I said, 'You are built to play this part. He's a saint and so are you,'" Wright recalled.

Bichir, who also attended the Sundance Zoom Q&A, said he was surprised to be considered a saint.

"I guess there is a little bit of that," Bichir said. "You just have to find it."

Edee moved to Wyoming to be alone. She left friends and family in the city. However, Wright felt Edee discovered with Miguel that she still needs other people, even though she lost those closest to her.

"We do need each other," Wright said. "We do face adversity and it's generally the compassion and kindness of another person that gets us through that difficult time. I think we all can resonate with that right now."

Bichir agreed that the message of interdependence was relevant in 2021. He worried that the trappings of modern convenience may make people think they can take care of themselves alone.

"Edee and Miguel are us -- all of us -- in different ways," Bichir said. "Two human beings can be very different, and at the same time, find each other, find comfort and the chance of healing."

The act of directing was also Wright's way of connecting with other people. She said she finds acting more solitary, while directing is a collaboration.

"I love the collaboration with all of the departments because every one is an architect of this building," Wright said. "We're all in it together. Everyone's helping direct."

"It wasn't safe to bring the trained bear onto a set where there are wild bears roaming around the cabin," Wright said.

Bichir saw wild bears, too. He said one bear would visit the craft service table to steal snacks from the movie production.

"It was so beautiful to see that in the wild," Bichir said. "I've seen them only in zoos before. Just to be there with that creature, my goodness."

Sundance Film Festival, which is virtual this year, runs through Wednesday. Tickets are available at Tickets.festival.sundance.org

Zendaya: 'Malcolm & Marie' was 'nerve-wracking,' also 'liberating' Halle Berry directed MMA film because no one else would Sia regrets caving to casting pressures for 'Music'

Movies // 1 day ago
'Good House' star Sigourney Weaver: It's not hard to love Kevin Kline
NEW YORK, Sept. 29 (UPI) -- Sigourney Weaver says she felt safe diving into deep emotional waters in the dramedy film, "The Good House," because she had her close friend and former "Dave" co-star Kevin Kline by her side.

Movies // 1 day ago
'My Father's Dragon' trailer brings children's book to life
Sept. 28 (UPI) -- "My Father's Dragon," an animated film from "The Secret of Kells" studio Cartoon Saloon and featuring Jacob Tremblay and Gaten Matarazzo, is coming to Netflix.
Advertisement