Dec. 4 (UPI) -- Netflix is giving a glimpse of the new film We Can Be Heroes.

We Can Be Heroes is directed by Robert Rodriguez and is a standalone sequel to Rodriguez's 2005 film The Adventures of Sharkboy and Lavagirl in 3-D. Slater and Pascal play members of a superhero team called the Heroics, while Chopra portrays the government official Mrs. Granada.

The new film centers on the children of the Heroics superheroes. The Heroics are kidnapped by alien invaders, leaving their kids to discover their own powers and save their parents.

The preview shows the kids, led by Missy (YaYa Gosselin), suit up and use their powers. The trailer features Guppy (Vivien Lyra Blair), the daughter of Sharkboy and Lavagirl (Taylor Dooley).

Taylor Lautner, who played Sharkboy in the original film, does not appear in the new movie.

Netflix released a first teaser for We Can Be Heroes in November. The movie premieres Dec. 25.

Chopra will also star in the Netflix film The White Tiger.

Movies // 11 hours ago
'The Munsters': Rob Zombie gives first look at Munster family
Oct. 18 (UPI) -- Rockstar and filmmaker Rob Zombie has released the first photo of the Munster family from his upcoming film adaptation of classic horror sitcom, "The Munsters." 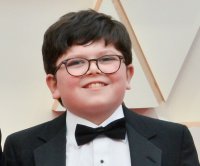