Oct. 6 (UPI) -- Netflix is giving a glimpse of the new documentary Blackpink: Light Up the Sky.

The preview shows Blackpink members Jisoo, Jennie, Rosé and Lisa reflect on their rise to fame. The group is now a "K-pop sensation" and the best-charting Korean girl group of all time.

"We grew into something that we didn't even know was possible," Rosé says.

The members also recall their time as trainees and how they instantly bonded.

"I'd ask myself, 'Do you want to give up because it's not easy?'" Jisoo says.

"But when it was the four of us ... the whole thing worked," the other members add. "We just clicked."

Netflix also released a poster and first look photos for the film.

BLACKPINK is one of the most popular groups in the world, but how well do you actually know Jisoo, Jennie, Rosé, and Lisa?

Blackpink: Light Up the Sky is directed by Carolina Suh. The film features exclusive interviews with Jisoo, Jennie, Rosé and Lisa and never-before-seen footage.

"Director Caroline Suh's trusted relationship with Jisoo, Jennie, Rosé and Lisa offers organic and honest moments that give viewers an authentic inside look into the lives of Blackpink, as well as the dedication and grueling preparation each member puts into every hit song, history-making performance and sold-out arena tour. We're thrilled to bring their story to their fans worldwide," Netflix VP of documentary features Adam Del Deo previously said.

Blackpink drops 'The Album' with surprise Cardi B track Monsta X to release 'Fatal Love' album in November BTS to release new album 'BE' on Nov. 20 What to watch next: Sign up for UPI's Streaming newsletter 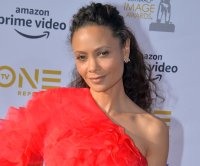