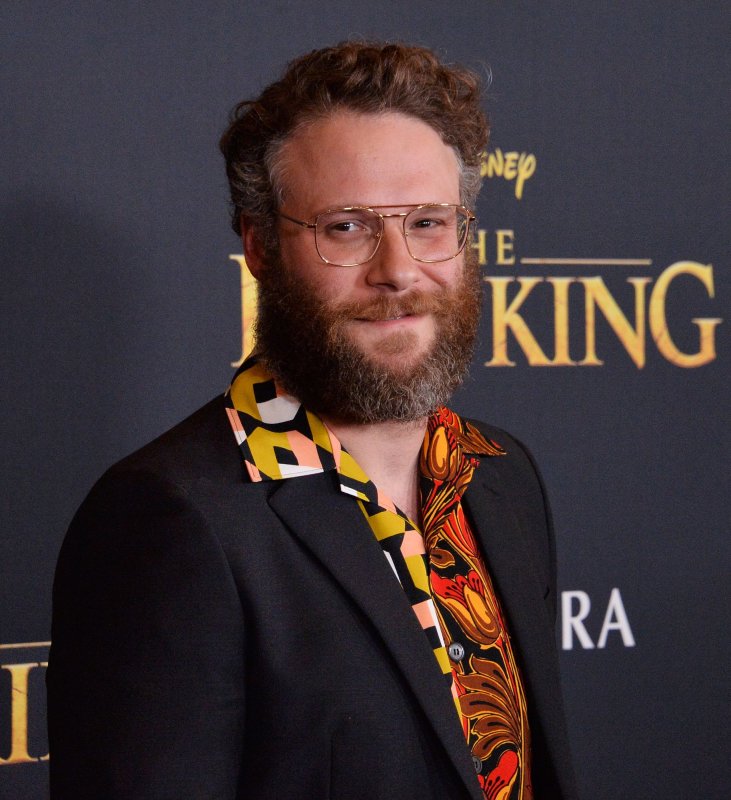 LOS ANGELES, Aug. 6 (UPI) -- Seth Rogen, facing visual effects challenges in playing two characters in HBO Max's An American Pickle, decided to add one more: He'd grow his own beard for one of them.

That meant Rogen had to complete all the scenes for Herschel Greenbaum -- who was frozen in a pickle factory accident in 1920 -- before he could shave and play Ben, Herschel's only living descendant.

Normally in films where one actor plays multiple roles, they can film each side immediately after the actor changes costume. Having the beard meant Rogen had to film Ben's side of a scene long after filming Herschel's.

"It would've made it easier to do it the other way," Rogen said in a Zoom Q&A after the film's virtual premiere on Tuesday. The show began streaming Thursday.

Rogen said movie beards often look fake and he feared it would spoil the illusion of the film.

Even in the blockbuster Avengers: Endgame, Rogen joked that Chris Hemsworth's Thor beard was the least convincing effect.

"They can better do thousands of portals with thousands of characters emerging through them than they can one man's fake beard," Rogen said.

To put the scenes together, Ian Poake filled in as Rogen's scene partner. When Rogen played Ben, Poake played Herschel and vice versa.

If Ben handed Poake an object, it appeared as though Rogen handed a cup to himself when the scene was completed. The interactions had to be precisely timed.

Rogen wore an earpiece that cued him with three beeps before the moment of contact. At first, Rogen said, the cues distracted him.

"I remember the first time I heard it in my ear I was just like, 'I can't do this. I don't think this is going to work.'" Rogen said. "Eventually, I got it."

As stressful as hitting those cues was, Rogen preferred it to his usual comedy scene partners. Rogen said other actors stress him out more.

"I hate to break it to the world," Rogen said. "Actors are kind of hard to deal with sometimes. Removing as many other actors from the equation as humanly possible actually made for a much easier filmmaking experience."

In one scene, Ben shows Herschel his seltzer maker. Herschel is impressed with this modern technology. Rogen said the viewer never notices the precise timing that went into allowing him to share a drink with himself on screen, and Poake's contributions will be erased entirely.

"If it works, no one notices anything," Rogen said. "It just seems like a normal scene of two guys making seltzer."

Ideally, once Rogen shaved, Herschel's scenes would be finished. However, Rogen ended up growing his beard again for a reshoot.

Despite requiring another 10 months of hair growth, the filmmakers still made their Thursday release date with the additional scene.

"We thought of one joke we wanted to film that was literally 10 seconds long," Rogen said. "I grew a beard for 10 months so we could go back and film it."

Movies // 40 minutes ago
Elizabeth Lail: 'Mack & Rita' is reminder to be our authentic selves
NEW YORK, Aug. 12 (UPI) -- Elizabeth Lail says "Mack & Rita" -- her comedy film about an anxious millennial homebody who magically transforms into a joyful, 70-year-old version of herself -- is a celebration of self-awareness and acceptance.

Movies // 1 day ago
Kat Graham: 'Collide' character is damaged, determined
NEW YORK, Aug. 11 (UPI) -- Singer and "The Vampire Diaries" actress Kat Graham says she wanted to star in "Collide" because it is a taut and entertaining thriller that also explores issues close to her heart.

Movies // 1 day ago
A meal with surprises is served in new trailer for 'The Menu'
Aug. 10 (UPI) -- A lavish meal takes a shocking turn in the new trailer for Searchlight Pictures' "The Menu," starring Ralph Fiennes and Anya Taylor-Joy.

Movies // 1 day ago
Movie review: 'Fall' reaches new heights for thrills
LOS ANGELES, Aug. 10 (UPI) -- "Fall" gets a full movie's worth of excitement out of two climbers stuck at the top of a tower.