May 20 (UPI) -- Zack Snyder confirmed on Wednesday that his version of the Justice League movie would be finished and air on HBO Max in 2021. The director hosted a watch party for his first Superman movie Man of Steel after which he announced the Snyder Cut.

After principal photography, Snyder suffered a family tragedy when his daughter died by suicide. Warner Bros. hired Joss Whedon to write and direct reshoots for the final Justice League film which opened November 17, 2017.

Ever since the studio released the film, fans of Snyder's work have been asking to see his original cut of the film, with the Twitter trend #ReleasetheSnyderCut. The studio said that Snyder never finished a cut, that the film was still in flux when Whedon completed it.

In November, stars Ben Affleck, who played Batman, and Gadot also shared #ReleasetheSnyderCut fueling speculation that there was a director's cut by Snyder. Affleck spoke about it further while giving interviews for his March film The Way Back.

Snyder himself posted on his Vero channel on February 29 that fans entering a contest could win a set visit to his upcoming production. This was accompanied by a photo of a clapboard for Justice League with a message that he intends to film additional scenes to complete his version of the film.

Snyder said he hosted the Man of Steel watch party and question-answer session to raise spirits of people struggling with stay-at-home orders.

"Many of us are struggling during this difficult time. Felt it could be cathartic to come together now for a Man of Steel Watch Party and celebrate the ultimate symbol of hope. Submit some questions, I'll answer a few after," Snyder tweeted about the event, which is to take place at 11 a.m. ET on Vero.

Cavil reprised the role in the 2016 sequel Batman v Superman: Dawn of Justice, which Snyder also directed, and 2017's Justice League, which Snyder began filming, but left due to his daughter's suicide.

Many of us are struggling during this difficult time. Felt it could be cathartic to come together now for a Man of Steel Watch Party and celebrate the ultimate symbol of hope. Submit some questions, I'll answer a few after. #manofsteel #superman https://t.co/PdvGayTe7b pic.twitter.com/GMvIWyD4y4— Zack Snyder (@ZackSnyder) May 18, 2020 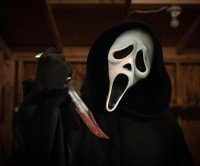 Movies // 1 week ago
Movie review: 'Scream' betrays its legacy by ignoring comic element
LOS ANGELES, Jan. 12 (UPI) -- The new 'Scream,' fifth in the series, is shockingly short on the franchise's trademark humor and botches the commentary on modern horror sequels. It opens in theaters Friday.
Advertisement