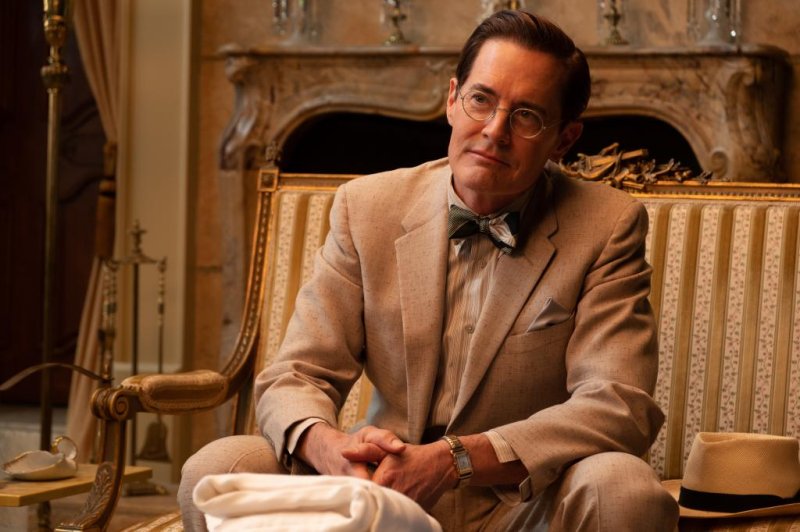 LOS ANGELES, May 15 (UPI) -- Al Capone was a leader in organized crime who ultimately went to prison for tax evasion. Capone, now available on video-on-demand, depicts the final year of his life.

Kyle MacLachlan plays Capone's (Tom Hardy) doctor and said he could feel empathy for Capone in this state.

Only 47, Capone suffers from dementia, is unable to control his bodily functions and speaks in a ravaged growl. Hardy portrayed the ailing Capone so intensely that MacLachlan found their scenes together uncomfortable, but productive for the film.

"It was difficult just to watch, to be in there, to watch this character go through this experience," MacLachlan told UPI in a recent phone interview. "The doctor has a lot of empathy for the character just because he's suffering as a human."

It wasn't quite enough to make MacLachlan empathize with the gangster. He could appreciate a human being suffering, though.

"You felt for what he was struggling with," MacLachlan said. "No one likes to see that."

Capone is writer/director Josh Trank's first film since his ill-fated Fantastic Four in 2015. MacLachlan said Trank asked him to play Capone's doctor because he was a fan of the actor's work.

"[Trank] said he was a fan of my work with David Lynch," MacLachlan said. "I think there was an appreciation for that and some of the characters that I've done with David."

MacLachlan's first movie was Lynch's adaptation of Frank Herbert's Dune. His second was Lynch's Blue Velvet, which stands out for MacLachlan to this day.

"The experience working in Blue Velvet was really, for me, not only an extraordinary working situation, but the film turned out to be so special," MacLachlan said.

Lynch called his Dune a "total failure" because producer Dino De Laurentiis and the studio took over the film. Denis Villeneuve will have another chance to tell Herbert's story. The first of his proposed two-part Dune film is scheduled for release Dec. 18, and MacLachlan can't wait to see another adaptation.

"I was a fan of the books when I was a young man," MacLachlan said. "They are so rich and full of stories. I'm looking forward to seeing what Denis does."

Timothee Chalamet will play the role of Paul Atreides, whom MacLachlan played in Lynch's film.

"Timothee is such an amazing actor," MacLachlan said. "I'm sure it's going to be a terrific ride.

Capone's release follows the end of MacLachlan's CBS sitcom, Carol's Second Act. He played a doctor at a hospital where Carol (Patricia Heaton) interned at the start of her medical career. MacLachlan said he will miss his co-stars the most. He connected with them via Zoom once CBS made the decision to cancel it.

"They become like family," MacLachlan said. "That's the most difficult part, I think."

MacLachlan had hoped for a second season, with Kelsey Grammer joining the cast. Grammer guest-starred on the season finale, which became the series finale.

"I was really looking forward to working with him," MacLachlan said. "His ability to work in that half-hour world, he's one of the best."

MacLachlan will be on television again soon in the historical drama Atlantic Crossing. He plays Franklin Delano Roosevelt in a World War II story from the perspective of Crown Princess Martha (Sofia Helin). He also played Thomas Edison in the film Tesla, which premiered at the 2020 Sundance Film Festival.

Capone's physician did not require historical research, MacLachlan said. Although Capone had a doctor by his side at the end of his life, Trank's script departed from historical fact. MacLachlan said FDR "required a lot of research" as did the role of Edison.

"I feel like I'm in the middle of a historical resurgence here," MacLachlan said.

Between MacLachlan's work with David Lynch and his current and upcoming historical roles were some pivotal TV appearances. On Desperate Housewives, he played Bree Van De Kamp (Marcia Cross's) second husband after her first was murdered.

Sex and the City still plays in repeats and is available to stream on Amazon Prime, HBO and DirecTV. MacLachlan played Charlotte (Kristin Davis') fiance and short-lived husband Trey MacDougal.

MacLachlan reunited with Lynch when Lynch revived his TV series, Twin Peaks, on Showtime. MacLachlan not only reprised his original role of Agent Cooper, but Lynch invented the new character Dougie.

Dougie was a duplicate of Cooper, so retained MacLachlan's appearance. However, Dougie could barely speak, dressed in oversize clothes, and acted childish.

"I don't think, if it were anyone else but David Lynch, that I would have had the opportunity to do something like that," MacLachlan said.