'The Woman in the Window': Amy Adams can't go outside in new trailer

Dec. 19 (UPI) -- Amy Adams is an agoraphobic child psychologist who has anxiety about leaving her home in the new trailer for upcoming thriller, The Woman in the Window.

The clip, released on Thursday, features Adams as Anna Fox who makes friends with her next-door neighbor Jane Russell, portrayed by Julianne Moore.

Anna, after hearing a scream, witnesses from her window Jane being stabbed by her husband, portrayed by Gary Oldman.

Anna calls the police but law enforcement questions her story as her medication can cause hallucinations. Another woman (Jennifer Jason Leigh) also appears and claims to be Jane.

Anna then searches for the truth by spying on her neighbors and gets a knife-wielding guest inside her home.

The Woman in the Window, based on author Dan Malory's book of the same name and directed by Joe Wright, is set to arrive in theaters on May 15. 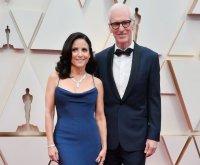