Brothers Ian (Holland) and Barley (Pratt) need assistance after a mysterious staff helped bring back the legs of their late father. The duo have 24 hours to bring back the rest of their dad to spend time with him briefly, before the spell wears off.

Manticore, who now works at a restaurant, gives Ian and Barley a map and a gem to aid them but forgets to tell them about a curse. Manticore then leaps into action to help the brothers along with their mother Laurel, voiced by Julia Louis-Dreyfus.

Ian and Barley are also seen running from the cops during a high speed chase.

Onward, from director Dan Scanlon and producer Kori Rae -- the team behind Monsters University -- is set to hit theaters on March 6. 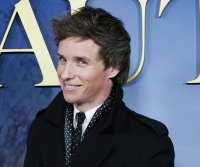