Peter, who has become somewhat of a celebrity due to the success of Bea's book about his life, still can't shake his reputation for being mischievous.

Peter then runs away from home and journeys far away by using a train. His new life becomes filled with trials, tribulations and new adventures.

"Adventuring out of the garden, Peter finds himself in a world where his mischief is appreciated, but when his family risks everything to come looking for him, Peter must figure out what kind of bunny he wants to be," reads the synopsis.

Movies // 5 hours ago
'Shang-Chi' tops the North American box office for 4th weekend
Sept. 26 (UPI) -- "Shang-Chi and the Legend of the Ten Rings" is the No. 1 movie in North America for a fourth weekend, earning an additional $13.3 million in receipts, BoxOfficeMojo.com announced Sunday. 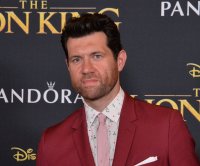