July 22 (UPI) -- A Beautiful Day in the Neighborhood is giving a glimpse of Tom Hanks as TV icon Mister Rogers.

The preview shows Rogers share his story and vision with Lloyd Vogel (Matthew Rhys), a cynical journalist assigned a profile piece on Rogers for Esquire.

"We are trying to give the world positive ways of dealing with their feelings," Rogers says in the trailer.

A Beautiful Day in the Neighborhood is based on a real-life 1998 Esquire article by journalist Tom Junod. The movie is directed by Marielle Heller and co-stars Susan Kelechi Watson and Chris Cooper.

Heller praised Rogers, who died at age 74 in 2003, as an inspiring voice of goodness in an interview with Entertainment Weekly published last week.

"He's a guide for how to slow yourself down and connect with what's true in your heart, your kindness, your patience, and your goodness," the director said. "Having his voice in my head for the past two years while I've been making this movie has made me a better parent."

"[He calls for] us to be our best selves," she added. "I approached every decision with the movie as: 'How would Fred approach this? How can we treat everybody with a level of emotional empathy and compassion that shows that we value everyone?' That was his main message: Everyone is valued."

A Beautiful Day in the Neighborhood opens in theaters Nov. 22. 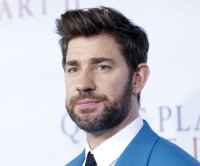