Angelina Jolie appears in the 2-minute preview as the titular sorceress and tells her nemesis Aurora (Elle Fanning) she forbids her to marry Prince Phillip (Harris Dickinson.)

"Nor was I," Maleficent replied, adding, "Love doesn't always work out well."

"Trust me, let us prove you wrong," Aurora countered, then proceeds to plan her wedding, incurring Maleficent's wrath.

Directed by Joachim Rønning, the movie is a live-action sequel to 2014's Maleficent and a spin-off of the 1959 animated classic Sleeping Beauty.

Mistress of Evil is set to open in theaters on Oct. 18. 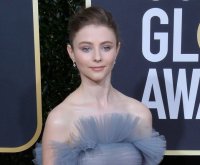