Bullock plays Malorie, a mom of two who fights to protect her kids from a mysterious force. The family must flee while blindfolded to avoid falling victim to an entity that takes on the form of one's worst fears.

Bird Box is based on the Josh Malerman novel of the same name. Susanne Bier (In a Better World, The Night Manager) directed the movie, which premieres Dec. 21.

Malerman praised the adaptation in a series of tweets Wednesday.

"Sandra Bullock rowing on a river, blindfolded, John Malkovich freaking out, and Sarah Paulson trying to to keep it together when she can't will forever hang as framed images in a very special, ghostly hall in my head," the author wrote.

"The script was written by the great @HIGHzurrer and the movie was directed by the awesome @DirSusanneBier," he added, referencing Bier and writer Eric Heisserer. "Just so excited."

Bullock and Paulson previously co-starred in the film Ocean's 8.

Movies // 19 hours ago
Tom Blyth to play young Coriolanus Snow in 'Hunger Games' prequel
May 17 (UPI) -- "Billy the Kid" actor Tom Blyth will star in the "Hunger Games" prequel film "The Ballad of Songbirds and Snakes." 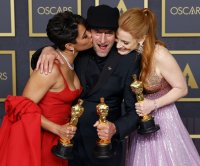