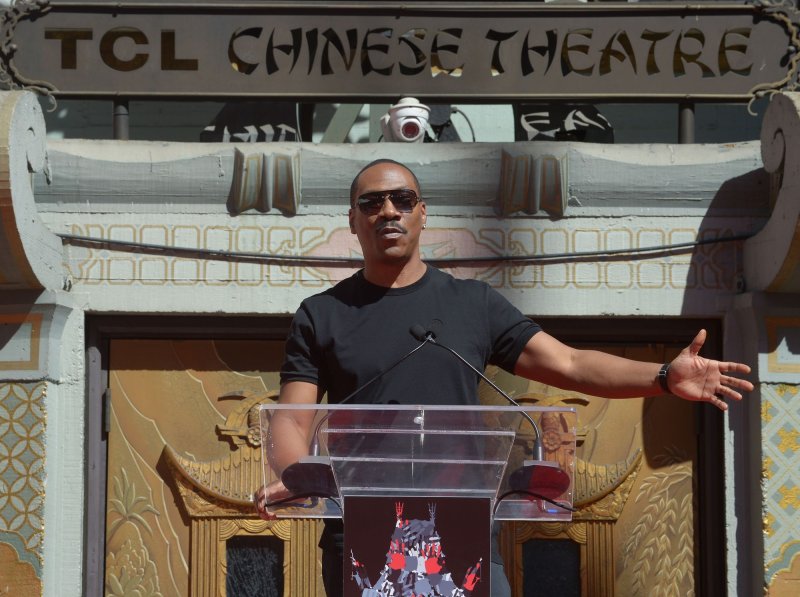 Actor Eddie Murphy speaks at a ceremony in front of the TCL Chinese Theatre in Hollywood on September 29, 2016. Murphy will star in a biopic about Rudy Ray Moore, the comedian and actor best-known for his role as 'Dolemite.' File Photo by Jim Ruymen/UPI | License Photo

June 7 (UPI) -- Eddie Murphy will star in a biopic about Rudy Ray Moore, the comedian and actor who starred in Dolemite, one of the biggest blaxploitation films from the 70s.

The biopic, Dolemite is My Name, will be produced for Netflix and begin production on June 12, Deadline reported. The film will be helmed by Craig Brewer, the director of Hustle & Flow, and penned by Scott Alexander and Larry Karaszewski, the writers behind well-known biopics The People vs. Larry Flynt and Ed Wood.

Moore was a musician and comedian during the 50s and 60s. But he began to gain a following when he self-released comedy albums in the 70s that were told from the raunchy and rhyming perspective of the character Dolemite, which was based on the stories about a pimp he heard from a friend while working in a record store in Hollywood.

With crude language and over-the-top descriptions of sex, the albums were considered to be so salacious, they were deemed more extreme than the most controversial comics of the day, including Richard Pryor and Redd Foxx. The albums also had cover art with adult language and nudity and were kept behind the counter in stores, covered in brown paper.

"I wasn't saying dirty words just to say them," Moore said in 1997. "It was a form of art, sketches in which I developed ghetto characters who cursed. I don't want to be referred to as a dirty old man, rather a ghetto expressionist."

Moore gained more mainstream recognition after he co-wrote and starred in Dolemite in 1975. The success of that film was followed by The Human Tornado, Petey Wheatstraw: The Devil's Son-in-Law and Money Hustler.

Movies // 1 day ago
Sundance movie review: 'Talk to Me' cleverly conjures evil spirits
Jan. 29 (UPI) -- The horror movie "Talk to Me" has a clever new take on spiritual possession that sends its cast of teen dabblers into dangerous and violent territory.

Movies // 1 day ago
'Avatar' tops North American box office for 7th weekend
Jan. 29 (UPI) -- "Avatar: The Way of Water" -- a current Best Picture Oscar nominee -- is the No. 1 movie in North America for a seventh weekend, earning an additional $15.7 million in receipts.

Movies // 2 days ago
Sundance movie review: 'Rye Lane' is a hilarious, romantic day trip
Jan. 29 (UPI) -- "Rye Lane" portrays a day in the life of two single Londoners who connect over helping each other through their respective breakups.

Movies // 2 days ago
Sundance movie review: 'My Animal' is a sexy, sensual werewolf saga
Jan. 28 (UPI) -- "My Animal" is a lesbian werewolf tale that delivers on both genres, though clearly emphasizes the LGBTQ romance.

Movies // 2 days ago
Sundance movie review: 'Drift' is a touching tale of friendship after tragedy
Jan. 28 (UPI) -- Cynthia Erivo and Alia Shawkat star in "Drift," the story of an African refugee finding a connection with a tour guide in Greece.
Advertisement