The clip, released Tuesday, chronicles Mercury's rockstar life and features Queen recording songs together in the studio before taking the stage in front of massive crowds.

"Bohemian Rhapsody is a foot-stomping celebration of Queen, their music and their extraordinary lead singer Freddie Mercury, who defied stereotypes and shattered convention to become one of the most beloved entertainers on the planet, the synopsis reads.

"The film traces the meteoric rise of the band through their iconic songs and revolutionary sound, their near-implosion as Mercury's lifestyle spirals out of control, and their triumphant reunion on the eve of Live Aid, where Mercury, facing a life-threatening illness, leads the band in one of the greatest performances in the history of rock music. In the process, cementing the legacy of a band that were always more like a family, and who continue to inspire outsiders, dreamers and music lovers to this day," it continues.

Filmmaker Dexter Fletcher was hired as the new director of Bohemian Rhapsody to replace original director Bryan Singer after he failed to show up to set on multiple occasions. Singer disputed the claims and said Fox did not give him enough time to deal with an illness in the family and his own health.

Bohemian Rhapsody is set to arrive in theaters on Nov. 2. 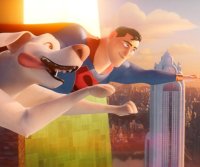