"Couldn't help myself and had to post this iPhone pic," Singer wrote on Instagram Monday alongside an image of Malek raising his fist into the air onstage while portraying Mercury.

Bohemian Rhapsody, scripted by Anthony McCarten with Queen members Brian May and Roger Taylor are serving as music producers, is a biopic that will follow the years leading up to the band's Live Aid concert in 1985.

Mike Myers, who famously performed Queen's song "Bohemian Rhapsody" during an opening scene in 1992's Wayne's World, is also in negotiations to star in an unknown role.

Couldn't help myself and had to post this iPhone pic 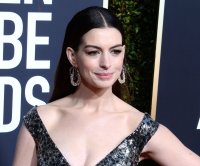