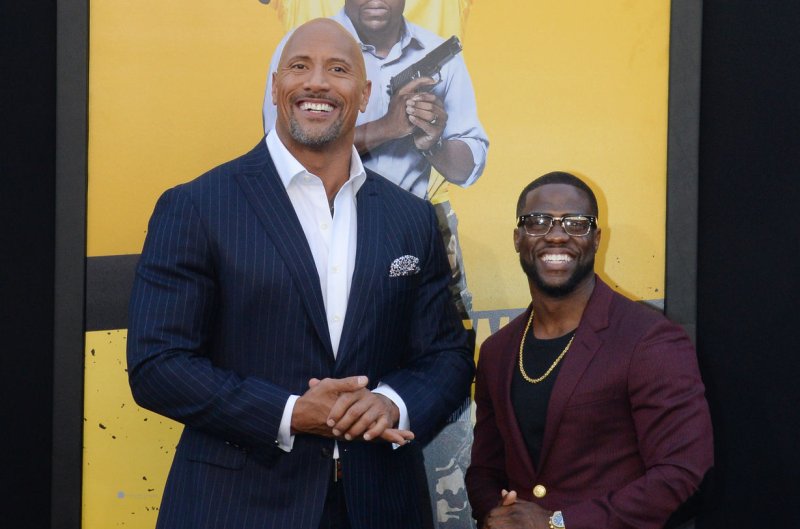 Dwayne Johnson (L) and Kevin Hart (R) attend the premiere of "Central Intelligence" on June 10, 2016. Johnson and Hart star together alongside Jack Black and Karen Gillan in the new trailer for "Jumanji." File Photo by Jim Ruymen/UPI | License Photo

Sept. 20 (UPI) -- Dwayne Johnson, Kevin Hart, Jack Black and Karen Gillan are trying their best to survive in the second trailer for Jumanji: Welcome to the Jungle.

The clip, released Wednesday, begins by showcasing how the board game of Jumanji seen in the 1995 original film starring Robin Williams, has been untouched for 20 years forcing the board game to adapt into a video game in order to trap in new players.

A group of high school students including Spencer, a nerd, Anthony, a jock, Martha, a bookworm and Bethany, who is the pretty girl at school, then encounter the game and get sucked into the dangerous world of Jumanji as avatars resembling Johnson, Hart, Black and Gillan.

The group then discovers they have a set of powers like in a video game including specific strengths and weaknesses along with three lives. Pop star Nick Jonas also appears in the trailer as a mysterious guide who can also fly a plane.

"In the brand new adventure Jumanji: Welcome to the Jungle, the tables are turned as four teenagers in detention are sucked into the world of Jumanji. When they discover an old video game console with a game they've never heard of, they are immediately thrust into the game's jungle setting, into the bodies of their avatars, played by Dwayne Johnson, Jack Black, Kevin Hart, and Karen Gillan. What they discover is that you don't just play Jumanji -Jumanji plays you. They'll have to go on the most dangerous adventure of their lives, or they'll be stuck in the game forever...," reads the synopsis.

The trailer ends after Hart accidentally explodes after eating cake, his character's one weakness.

Directed by Jake Kasdan, Jumanji: Welcome to the Jungle is set to arrive in theaters on Dec. 22.