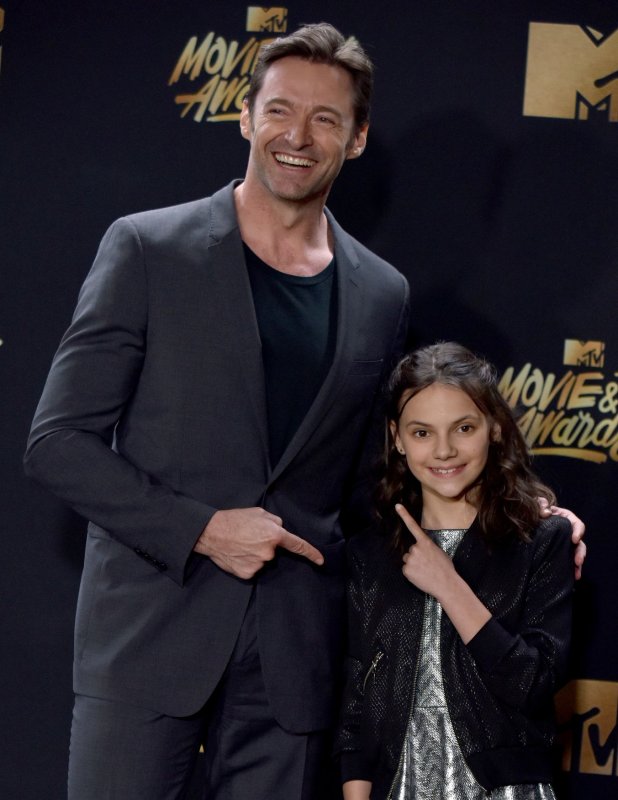 "Logan" stars Hugh Jackman and Dafne Keen appear backstage during the MTV Movie & TV Awards on May 7. In a new interview, Jackman shares what he initially thought of the character X-24 in "Logan." Photo by Christine Chew/UPI | License Photo

May 19 (UPI) -- Hugh Jackman has shared his thoughts regarding Logan villain X-24 and how he initially felt uneasy about portraying the character himself in the film.

"I was very skeptical of having X-24 being played by me," the actor told Collider. According to Jackman, he felt that appearing as the evil clone of Logan would be off-putting to the audience who have asked for a more aggressive and rage-filled Wolverine to appear in the film as he has in the comics.

"I understood what it represented and thematically the idea of battling himself, which of course is right at the core of this character that we never fully got to, so I kind of loved the externalization of that," he continued.

"But I also know that myself as an actor and fans of Wolverine come up to me in the street every day and go, 'We wanna see that full berserker animalistic crazy off-the-wall Wolverine,' right? That we don't feel we've fully seen it, so I was like, 'Jim if we introduced halfway or near the end of the movie that full berserker animalistic crazy Wolverine and he's somehow fighting our hero, audiences won't know what to feel,'" Jackman said, referencing the film's director James Mangold, who pushed for Jackman to play X-24.

"When I saw the movie it's just clear, for some reason I think because he skewers Patrick Stewart in that moment the audience just sort of hates him. We did some subtle things, I changed the bridge of my nose, I wore contacts—I just wanted him to look a little different from myself. And I think by that point we'd created already the Wolverine that people wanted to see. So anyway, that was one of my examples of being wrong," the 48-year-old concluded.

Logan which released in March, grossed over $600 million worldwide. The film which represents the second R-rated X-Men release following Deadpool, faced hurdles at studio Fox as they were nervous about releasing a more violent take on Wolverine.

Logan producer Hutch Parker told Cinema Blend that the studio came around once Mangold shared his vision for the project. "Jim was sort of a catalyst in so many different ways, in galvanizing the studio's confidence about doing something bold," he said.

"In the conviction that he had about the tone that it required and the kind of amazing instinct and navigational skill he had about where we needed to go in the story... I honestly cannot picture another filmmaker doing anything even close to what was accomplished with this film. That's how significant change occurs in storytelling, in filmmaking."