CHICAGO, Nov. 4 (UPI) -- Jennifer Aniston and Kate McKinnon star in the trailer for the upcoming Office Christmas Party, about a company that throws an epic Christmas celebration in order to land a top client.

Aniston stars as no-nonsense CEO Carol, a woman more concerned with the numbers than fun. Carol's younger brother Clay, played by T.J. Miller, is in charge of a failing branch of the company and its only salvation comes from landing a major account.

In order to impress the potential client, played by Courtney B. Vance, Clay and the rest of the staff, including Kate McKinnon, Jason Bateman and Olivia Munn, throw a major holiday bash in the hope of sealing the deal and saving their jobs. 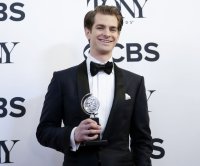