Joaquin Phoenix at the premiere of "Her" on December 12, 2013. Phoenix is now in talks to star as Jesus Christ in an upcoming "Mary Magdalene" biopic. File Photo by Jim Ruymen | License Photo

Joaquin Phoenix at the premiere of "Unity" on June 24, 2015. Phoenix is now in talks to star as Jesus Christ in an upcoming Mary Magdalene biopic. File Photo by Jim Ruymen/UPI | License Photo

The actor is being pursued for the role as reported by {link:Deadline Hollywood; "http://deadline.com/2016/04/joaquin-phoenix-eyed-jesus-christ-mary-magdalene-rooney-mara-weinstein-company-universal-1201741411/" target="_blank"} however, nothing is set in stone yet as scheduling conflicts may prevent Phoenix from joining the film.

Phoenix would be joined by Rooney Mara who signed on to play Mary Magdalene back in February.

Set to be directed by Garth Davis, Mary Magdalene is being backed by Universal Pictures and produced by The King's Speech producer See-Saw films.

First announced in January, Mary Magdalene was described as an "authentic and humanistic portrait of one of the most enigmatic and misunderstood spiritual figures in history."

With no release date set, Universal hopes to begin shooting the film next summer for an anticipated release in 2017.

Phoenix was last seen in Woody Allen's Irrational Man and as the narrator in the documentary Unity. 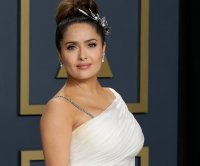 Movies // 2 days ago
Fourth 'Hotel Transylvania' film set for fall release
June 19 (UPI) -- The fourth and final installment in Sony's "Hotel Transylvania" film franchise will be released in theaters Oct. 1 instead of July 23 as planned.
Advertisement