The sequel is arriving in theaters 14 years after the original romantic comedy became a beloved blockbuster. 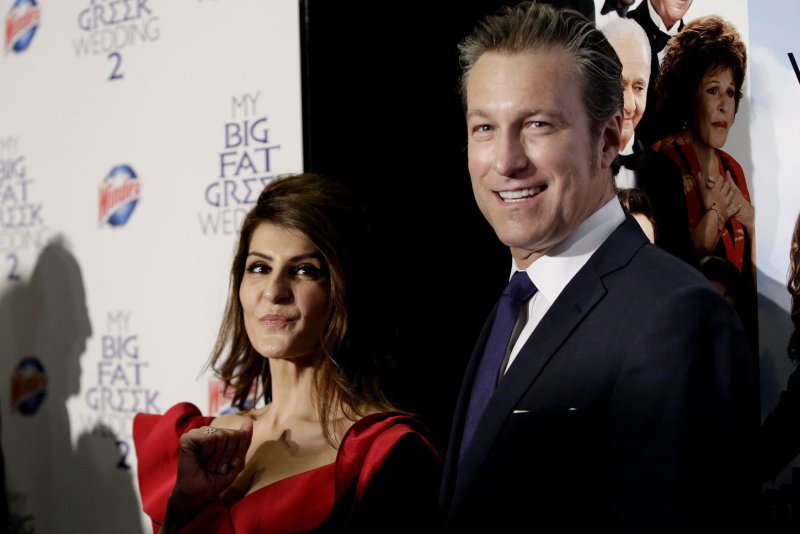 Tom Hanks and Rita Wilson arrive on the red carpet at the "My Big Fat Greek Wedding 2" premiere on March 15, 2016 in New York City. Photo by John Angelillo/UPI | License Photo

NEW YORK, March 16 (UPI) -- Screenwriter and actress Nia Vardalos says her real-life struggle to become a parent is why there is a 14-year gap between her 2002 romantic comedy My Big Fat Greek Wedding and its follow-up.

"The wait for the sequel is entirely my fault," Vardalos -- who adopted her daughter in 2008 -- said at a New York press conference to promote My Big Fat Greek Wedding 2 last weekend. "I apologize, as the true Winnipegger that I am. I had written at the end of the first movie that Toula and Ian were parents and, in reality, the struggle to become a parent was real for me. It was very long and then I did become a mom -- happy ending! And on my daughter's first day of kindergarten, I was crying so hard and so loud, other moms were backing away from me and someone said to me: 'Hey, come on, in 13 years they're going to go off to college. What's the big deal?' And I went, 'What?' And that's the moment that I realized that I might have the idea for the sequel and I went away and started writing that day."

The second film entry in the franchise, which also included a short-lived TV sitcom, follows Vardalos' Toula and John Corbett's Ian as they continue to deal with Toula's overwhelmingly tight-knit, Greek family while their teenage daughter Paris [played by Elena Kampouris] tries to figure out how far away she wants to go to university.

Asked by UPI how they balanced what was special about the original film with moving the story forward for a 2016 audience, Corbett was the first to reply with: "I think that X factor of magic is so hard to define. How do you recreate some sort of magic that happened on a few-million-dollar-movie that may or may not see the light of day 15 years ago?

"When we made the first one, the World Trade Towers were still standing; that's how long ago it was and then to come back and try to recreate that was not something that was in my hands at all, it was mostly in hers by putting pencil to paper," Corbett noted. "I think having seen the second movie that it happened. Somehow that magic happened twice because this movie does it for me."

Director Kirk Jones chimed in: "People say to me, 'Do you come in and try to put your mark on this project [after Joel Zwick helmed the first picture]'? And I say: 'No! It's kind of the last thing I wanted to do.' It worked so well before. It was so perfect on every level that I saw myself as having responsibility to try and come in and do whatever I could to try to recreate that."

"I think that people go through real tragedies and we have had the benefit of getting letters all these years from people who have told us about their lives, so what I went through in my quest to be a mom does not compare in any way, but in the quiet time that I took to reflect on it, it made me a better person," Vardalos added.

"I am so grateful that I didn't have a biological child because my daughter -- meeting my daughter who was almost 3, living in American foster care -- all that happened led me to my real daughter. So, in the same way, I am so grateful that the idea for the sequel and the desire to do the sequel did not come to me because what I went through informed my writing and let me go deeper with this next one and we weren't afraid of that. We weren't afraid to show what a real marriage can be like and we weren't afraid to show that this family has aged and that is OK.

"We all look like we've been dipped in pickle juice," she laughed.

Vardalos, Corbett and Kampouris turned out for the glitzy premiere of My Big Fat Greek Wedding 2 in New York Tuesday night.

John Goodman to play police commissioner in 'Patriots Day' 'Zootopia' is the No. 1 movie in North America for a second weekend New 'Indiana Jones' film announced, Harrison Ford, Steven Spielberg set to return Gal Gadot on learning she was auditioning for Wonder Woman: 'I went dead'