The actors last co-starred in "Harry Potter and the Deathly Hallows: Part 2" in 2011.

The 27-year-old English actor and 24-year-old actress spent time at Universal Studios in Orlando, which is home to the Wizarding World of Harry Potter theme park.

"Family time #stillnoredheademoji," Wright captioned a photo of herself with Grint on Sunday.

Grint and Wright played siblings Ron Weasley and Ginny Weasley in the Harry Potter movies alongside Daniel Radcliffe and Emma Watson as Harry Potter and Hermione Granger. The actor told People he "never looks back" at his kissing scene with Watson in an interview Friday.

"I've known Emma since she was literally 9 years old and we had this very brother-sister relationship," he shared. "[The scene] just felt very surreal. I have a memory of her face getting closer and closer. Like, 'Oh my God.'"

"I can't really remember anything apart from that," he said. "One take was enough. It was such a huge moment and there was so much expectation. Quite a lot of pressure, actually." 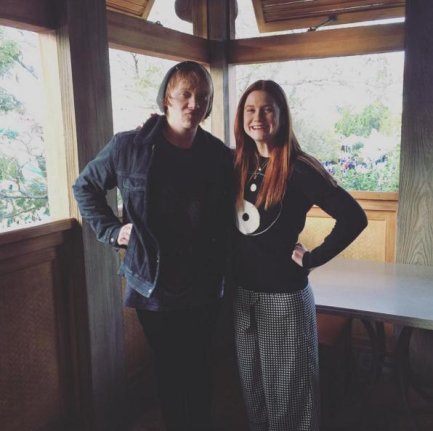 The Harry Potter movies are based on the J.K. Rowling book series, and earned a combined $7.7 billion at the box office. Grint last appeared in the comedy Moonwalkers with Ron Perlman, while Wright is slated for The Highway is for Gamblers with Nikki Reed.

Movies // 2 days ago
Idina Menzel on making 'Disenchanted': 'We had so much fun'
Dec. 2 (UPI) -- Idina Menzel discussed the "Enchanted" sequel "Disenchanted" on "Watch What Happens Live."

Keke Palmer reveals she is pregnant while guest hosting 'SNL'