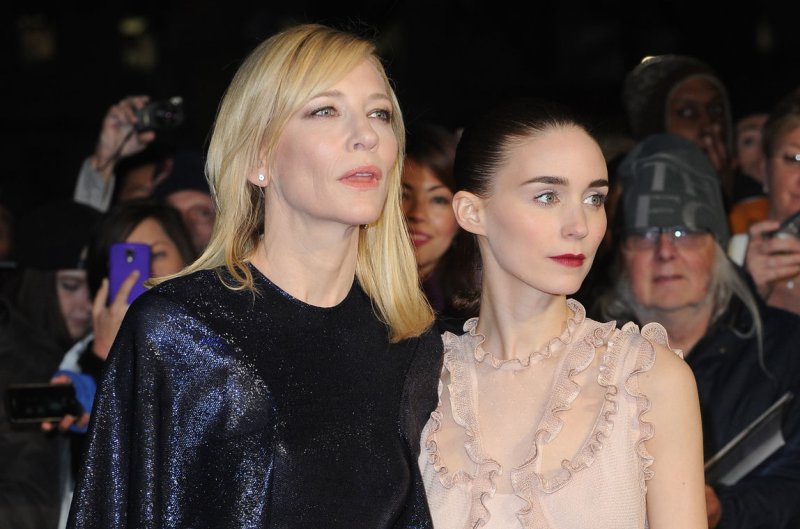 The women -- who are also current Oscar nominees -- recently discussed their roles at a New York press conference to promote Carol, which is the big-screen adaptation of the late Patricia Highsmith's novel The Price of Salt. Directed by Todd Haynes and written by Phyllis Nagy, the picture also features Sarah Paulson and Kyle Chandler. It is in theaters now.

Cate, your character Carol asks Rooney's Therese about what she wants out of life and, yet, because of the time and place, it seems no one had been really interested in what Carol was looking for. What were some of the cues for you as you approached this character?

CB: I think the questions that she hadn't been asked, she hadn't asked herself. I think Carol is a deeply private person whose sexuality and relationship to herself is not unsettled or ambiguous, but she lives in a quiet hell because she is not able to fully express herself. I guess it's the way she was brought up. But, also, she has not been in a loveless marriage. Everyone keeps describing it as a loveless marriage. I think the complicated thing for Carol is in being confronted by Therese at the time in her life that it is. She has got an enormous amount to lose. She's found a sort of unhappy balance with... If you can find an unhappy balance with Kyle Chandler. It would be very difficult. But with [his character] Harge because of her love for her daughter and, so, she is risking a lot. There is a beautiful line that Phyllis wrote describing Therese as being flung out of space. But I also think Carol is describing that situation of being in unchartered territory, free-floating. As you do when you fall in love with anyone for the first time. You feel like you've never been here before. You're being confronted with questions, being confronted by sides of yourself, as Todd suggests, that you have fled to a territory that you've never been in before.

Rooney, how did you map out Therese's journey?

RM: Me and Todd talked a lot about that and then we had two weeks of rehearsal in Cincinnati with everyone and that was pretty much what we were doing in rehearsal; not specifically mapping out Therese's journey, but just mapping out the entire script. When you shoot a film, obviously, you don't shoot in order. So, you kind of have to do that with every facet of the script.

Can you talk about how universally relatable the romance between Carol and Therese feels to moviegoers, regardless of their own sexuality?

RM: To me, there is no difference [between heterosexual and homosexual relationships,] so it is kind of a difficult question to answer. I think one of the great things about the film is that it's not a political film. It's not a film with an agenda. We're not preaching to the audience and so people are allowed to watch it for what it is, which is a love story between two humans.

Despite the difference in their ages and stages in life, Carol's motives never feel predatory. Do you think the relationship would be perceived differently if this was the story of an older man with a younger woman?

RM: I don't know. Would it ever feel predatory? I mean, it's not like I'm 17 years old. Therese is younger than Carol and, certainly, they are at different stages of their lives, but I don't think that she's so young that it would ... It never felt predatory to me and I don't think it ever really would have -- male or female. CB: The interesting thing about this is the obsession. Actually, perhaps, more so in the book, there is this pursuit, this obsessive pursuit that Therese has of Carol and because of Carol's sense of consequence and the difference in their ages and experiences and, also, their different socio-economic backgrounds, there is a sense of, "We've got to quiet the horses here and not go too quickly with this because I know this is not necessarily going to end well." ... But that is delicious stuff to play with because that's what loads up all of those silences and every word is not only carefully chosen by the beautiful screenplay, but by the women. "Can I say this?" "This might have two meanings. I'm not sure that was taken the right way. Did I just hear what I thought you were saying behind what you just said?" It's wonderful stuff to play with because there is so much stuff between them and keeping them apart.

You starred in 1999's "The Talented Mr. Ripley," which was also based on a novel by Highsmith. Did you read "The Price of Salt" while making that earlier film and, if so, how has your understanding of it since changed?

CB: It's one thing entirely, reading a novel, and then reading it again when you are coming to play a character in that book. I just read everything I could of hers at the time we were making Ripley, and it was actually, to my shame, the first time I had encountered her work. But I also was very interested in all the sort of filmic incarnations of her work, as well, and went back and revisited [the book upon which Carol was based] and there are some wonderful observations -- and parts of an internal monologue that Therese has -- but observations of Carol that are in the novel that were really, really useful... But then to try to make that stuff manifest was really exciting.

Phyllis, do you know if Highsmith – who died in 1995 at the age of 74 – was pleased with the cinematic re-imaginations of her canon?

PN: She didn't like many of the film adaptations of her work. She couldn't stand them, especially Strangers on a Train.
CB: Oh, what does she know? It was good!

Movies // 3 days ago
Dakota Johnson says the making of 'Fifty Shades' was 'psychotic'
June 28 (UPI) -- Dakota Johnson discussed the challenges of filming the "Fifty Shades" movies, including her issues with author E.L. James.