The actress also appears to have gotten ombré highlights. 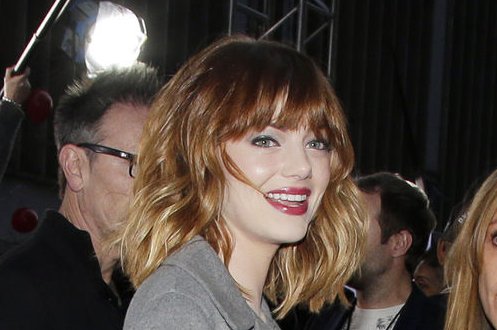 Emma Stone arrives on the red carpet at The Amazing Spider-Man 2 premiere at the Ziegfeld Theater in New York City on April 24, 2014. UPI/John Angelillo | License Photo

Emma Stone, a cast member in the motion picture crime drama "Gangster Squad", attends the premiere of the film at Grauman's Chinese Theatre in the Hollywood section of Los Angeles on January 7, 2013. UPI/Jim Ruymen | License Photo

Actress Emma Stone, a cast member in the motion picture fantasy "The Amazing Spider-Man", attends the premiere of the film at Regency Village Theatre in the Westwood section of Los Angeles on June 28, 2012. UPI/Jim Ruymen | License Photo

The 25-year-old actress debuted her new hairstyle Thursday in New York City while promoting The Amazing Spider Man 2. She now dons an adorable fringe and also appears to have gotten ombré highlights.

I thought it was impossible to like Emma Stone more than I already do. I was wrong. Her new haircut is everything! pic.twitter.com/rm0Vktjytr

The star and her new 'do looked stunning Thursday evening at The Amazing Spider Man 2 premiere. She wore a pale Prada gown with cutout side details and embellished straps and trim, and accessorized with Sidney Garber Jewelry rings.

There is nothing I do not love about this Emma Stone look: pic.twitter.com/15WdHuGKFk

Stone and real-life beau Andrew Garfield have recently traveled all across the world to promote the new Spider Man movie. The pair spoke to Vogue for the magazine's May issue, and Stone says the opportunity to work with Garfield has been "fun."

"It's been fun working with him just because of who he is as an actor and person," she says. "I think it would be fun no matter what."

"I thank my lucky stars that we've been able to be on this ride together," Garfield adds. "We all need companions in the mystery to get you out of your head and into your heart."