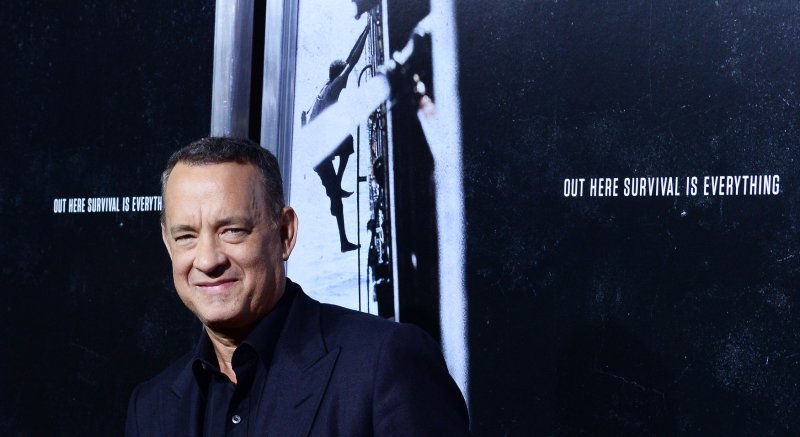 Cast member Tom Hanks attends the premiere of the biographical motion picture thriller "Captain Phillips" at the Academy of Motion Picture Arts & Sciences in Beverly Hills, California on September 30, 2013. The film is the true story of Captain Richard Phillips and the U.S. flagged MV Maersk Alabama's 2009 hijacking by Somali pirates. The Alabama was the first American cargo ship to be hijacked in two hundred years. UPI/Jim Ruymen | License Photo

NEW YORK, Oct. 10 (UPI) -- Double Oscar-winning actor Tom Hanks says he felt a tremendous responsibility to accurately portray Richard Phillips, a real-life merchant mariner who -- along with his crew -- was taken hostage at sea by Somali pirates in 2009 while on a voyage to Kenya.

"I read his book ['A Captain's Duty: Somali Pirates, Navy SEALs, and Dangerous Days at Sea'] prior to reading the screenplay and I did get together with him on two occasions and explained to him, 'You know, I will say things you never said and I will be places you never were, but if we do this right, thematically, we will be spot-on with the nature of what happened to you and how,'" Hanks said at a recent press conference at the New York Film Festival.

"It's a very environmental movie," the 57-year-old California native explained. "Shooting it as we did -- on-board a more-or-less identical ship to the Alabama -- at sea or in very small confines. So, I think the task of folding ourselves into Paul's good hands was always to be true to the motivations of everyone involved. If, for the sake of storytelling, you start manufacturing moments that truthfully were not part of the five or six days, well, then I think you can get into trouble there. I could probably walk you through this and say: 'There. That's a moment that didn't happen exactly that way, but, thematically, it is what happened. That is tricky and it can get away from you, but we were always searching for that combination of procedure and behavior that was going to be, not just reminiscent, but very reflective of what really happened and that's tough when you're telling non-fiction entertainment."

So, how does one prepare to play a man who is still alive and well and likely to see the film that recounts his harrowing tale?

"You have to load up with an awful lot of facts, quite frankly," Hanks noted. "You've got to read and look at video and listen to stuff, but there is always some sort of detail that makes the final tumbler lock into place. I saw Rich and [and his wife] Andrea on a couple of occasions. You don't want to be an idiot. You don't want to ask, 'What were you feeling?' Sorry. 'What was it like? What were you feeling? Are you a hero?' You don't ask questions like most journalists do when the time comes. 'What was it like?'

"I know, cheap shot, folks," he teased the gathered reporters. "Be on my end one of these days, see how it goes. People keep saying, 'You always give the same answers.' Well, they are the same questions, aren't they? But Andrea said something that was quite interesting. I asked, 'Do you ever visit Rich on the ships?' And she said: 'I used to, but [I don't anymore because] it's no fun because he is a completely different human being when he is on the job.' He's very easygoing. I would almost describe him as almost happy-go-lucky and funny. But on-board the ship he is always serious. There is always serious work that he, as the captain, had to do. And that was the tumbler for me. I don't know what it was, but all of the 52 cards became a bit of a shuffle and I felt as though I knew what to do every time Paul presented something."