Garner and Berry ask for law protecting their kids from media

Jennifer Garner arrives on the red carpet at the 85th Academy Awards at the Hollywood and Highlands Center in the Hollywood section of Los Angeles on February 24, 2013. UPI/Kevin Dietsch | License Photo

"My three children are private citizens," she said. "I love my kids. They're beautiful and sweet and innocent, and I don't want a gang of shouting, arguing, lawbreaking photographers who camp out everywhere we are all day, every day, to continue traumatizing my kids."

Berry told the committee about when she was in a custody battle with her ex-boyfriend and photographers asked their 5-year-old daughter: "'How do you feel, Nahla? You may not see your father again. How do you feel about that?'

"They say curse words and call me names, all trying to provoke some sort of response to sell a photograph," Berry said.

The proposed anti-paparazzi bill would make it a crime for photographers to photograph children without their legal guardian's permission, E! News said. 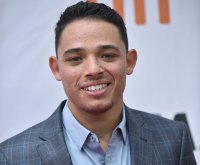