Best Actor Jean Dujardin for the movie "The Artist" appears with presenter Natalie Portman backstage at the 84th Academy Awards at the Hollywood and Highlands Center in Los Angeles on February 26, 2012. UPI/Jim Ruymen | License Photo

The Israeli-American star will also act in and write the screenplay for the movie based on Amos Oz's memoir. It is about how Oz's father tried to help his mentally ill mother cope in the 1940s, E! News said.

The project is being funded by a grant from the Jerusalem Film Fund and production is to begin in January, the Post reported.

Portman won an Oscar for her work in the ballet thriller "Black Swan." She has helmed several short films, as well as a segment for the anthology movie "New York, I Love You," E! said. 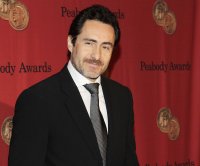