Helen Mirren arrives on the red carpet for the 83rd annual Academy Awards at the Kodak Theater in Hollywood on February 27, 2011. UPI/David Silpa | License Photo

LONDON, March 13 (UPI) -- Actress Helen Mirren was among a group of artists who signed a letter decrying budget cuts to arts programs across the United Kingdom.

In a letter to The Observer, Mirren, David Tennant and others said public investments in the arts pays a "staggering" return.

"Culture cannot and should not be an easy target for cuts," the letter said.

Arts Council England, which distributes funding to hundreds of galleries, theaters and other arts venues, had its budget cut by nearly 30 percent and the U.K. Film Council was scrapped. Its projects included the Oscar-winning film "The King's Speech."

Even so, Culture Secretary Jeremy Hunt said many other areas, including the police, would be cut even more.

"Before the last election the government promised to usher in a 'golden age' for the arts," the letter said. "The reality couldn't be further from this … we are currently facing the biggest threat to funding the arts and culture have experienced in decades."

The letter's signatories said government funding is "critical" and the arts contribute more than $10 billion annually to the economy.

"Cutting off funding at a local level deprives a community of its cultural focus and future audiences from a generation of talent," said actress Julie Walters.

Hunt implored the government to consider the impact of budget cuts.

"I would urge local councils to recognize the huge economic importance of the arts, as well as the cultural and social importance," Hunt said. "But at a national level … the actual net cut in arts funding is only 11 percent and that is a lot better than, for example, the police."

Movies // 9 hours ago
'Predator' series goes back to the past in 'Prey' teaser
May 16 (UPI) -- The origins of the Predator series are explored in the newly released teaser trailer for Prey. 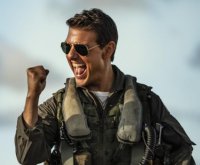 Movies // 4 days ago
'Sneakerella' star Chosen Jacobs: 'We all can relate to having a dream'
NEW YORK, May 12 (UPI) -- Chosen Jacobs said he had no trouble relating to his "Sneakerella" character, El, an artist who works hard to make his big dreams come true.

Movies // 4 days ago
Hayden Panettiere to reprise role as Kirby Reed in sixth 'Scream' movie
May 11 (UPI) -- Hayden Panettiere, a fan favorite in the series, is set to return for the sixth installment in the "Scream" franchise.
Advertisement