English actor Christian Bale, a cast member in the motion picture crime thriller "Public Enemies", attends the premiere of the film with his wife Sibi Blazic in the Westwood section of Los Angeles on June 23, 2009. (UPI Photo/Jim Ruymen) | License Photo

"Until Chris tells me, I don't believe it," Bale told E! News about when he knows another Batman movie is on the horizon. "It's gotta be from his mouth, or else I don't really know."

Bale went on to say Nolan hasn't informed him regarding whether he plans to make a fourth installment in the franchise after he completes "Rises."

"The thing is that this will be, I believe, unless Chris says different, this will be the last time I'm playing Batman," Bale told E! News. 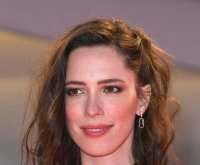