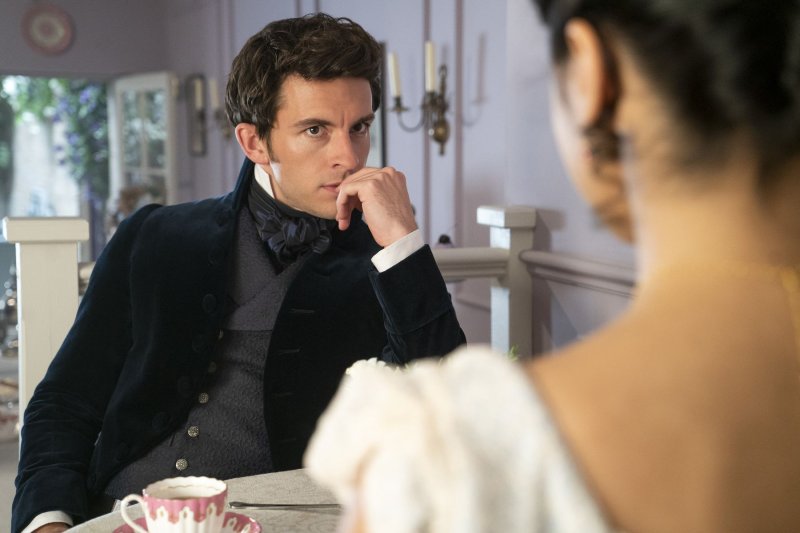 Jonathan Bailey, who plays Anthony on "Bridgerton," can also be seen in "Broadchurch," "W1A" and other TV series and films. Photo credit Liam Daniel/Netflix

April 7 (UPI) -- Fans of Bridgerton star Jonathan Bailey can watch the actor in Broadchurch and other TV series and films.

Bailey took center stage in Bridgerton Season 2, which focused on Anthony's search for a wife. The season broke the Netflix single-week record for most-viewed English-language TV series, with 251.7 million hours viewed in its first week of release.

Bridgerton was renewed for Seasons 3 and 4 at Netflix in April. Until the series returns, fans can see more of Bailey in his earlier projects.

The CBBC historical drama takes place in 15th century Florence, Italy, and stars Bailey as a teenage Leonardo da Vinci. The show follows da Vinci (Bailey) as he pursues his interests in painting and inventing.

Leonardo had a two-season run and is available to stream on Plex.

The ITV crime drama is set in Broadchurch, a fictional town on the coast of Dorset, England. The series follows Alec Hardy (David Tennant) and Ellie Miller (Olivia Colman), two detectives who investigate the murder of an 11-year-old boy.

Broadchurch aired for three seasons and is available to stream via a PBS Masterpiece subscription on Amazon Prime Video.

The BBC Two mockumentary workplace comedy takes place at the BBC. The show is a followup to Twenty Twelve, which spoofed the organization of the 2021 London Summer Olympics.

Bailey joined W1A in Season 1 as Jack Patterson, the personal assistant of Anne Rampton (Parish), head of output at the BBC. Bailey appeared as a series regular in Seasons 2 and 3.

W1A is available to stream on Netflix.

The Channel 4 comedy-drama is created and written by Phoebe Waller-Bridge (Fleabag), who also has a starring role. The series follows six 20-somethings as they live together in a former hospital.

Crashing consists of six episodes and is available to stream on Netflix.

Bridgerton isn't the only place you can find Jonathan Bailey on Netflix!

Once you've finished Season 2, check out: Crashing (the first TV show Phoebe Waller-Bridge ever created), The Young Messiah (a 2016 biblical drama), or W1A (a satirical sitcom about working at the BBC). pic.twitter.com/MlnAngh3V2— Netflix (@netflix) April 1, 2022

The 2017 biopic explores the true story of Donald Crowhurst, a British businessman and amateur sailor who attempted to complete the Sunday Times Golden Globe Race in 1968.

The Mercy stars Colin Firth as Crowhurst and also features Rachel Weisz, David Thewlis and Ken Stott. The film is written by Scott Z. Burns and directed by James Marsh.

The Mercy premiered at BAFTA New York in 2017 and opened in theaters in February 2018. The film is available to stream on Crackle.

Music // 29 minutes ago
Demi Lovato talks new album and 30th birthday on 'Fallon'
Aug. 17 (UPI) -- Singer Demi Lovato went on "The Tonight Show Starring Jimmy Fallon" to talk about their 30th birthday and going back on the road to promote their latest album.

TV // 36 minutes ago
TV review: 'She-Hulk' sabotages feminist series with Marvel Easter eggs
LOS ANGELES, Aug. 17 (UPI) -- "She-Hulk: Attorney at Law" never gets past the most basic feminist commentary and undermines its heroine by focusing on the male-dominated Marvel world.

TV // 19 hours ago
Empowering 'She-Hulk' role made a 'real fighter' out of Jameela Jamil
NEW YORK, Aug. 16 (UPI) -- Jameela Jamil says she was surprised by how physically challenging and empowering her "She-Hulk: Attorney at Law" character would become.