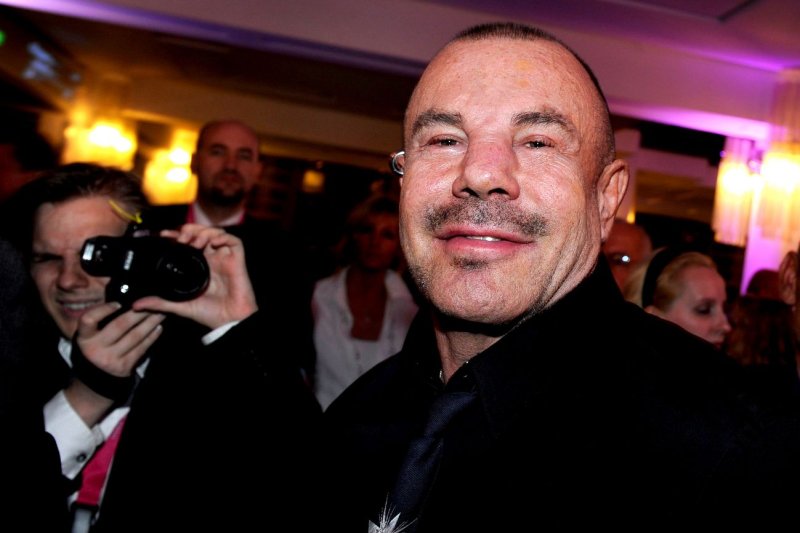 French designer Thierry Mugler attends the world premiere of a show in Berlin, Germany, September 2, 2010. Thierry Mugler has died at the age of 73. Photo by Jens Kalaene/EPA-EFE

Jan. 24 (UPI) -- French fashion designer Manfred Thierry Mugler, who is known for having helped establish the look of the 1980s, has died. He was 73.

"We are devastated to announce the passing of Mr. Manfred Thierry Mugler on Sunday, Jan. 23," the statement read. "May his soul Rest In Peace."

His titular fashion brand also confirmed his death on its Instagram page, calling the iconic French designer "[a] visionary whose imagination as a couturier, perfumer and image-maker empowered people around the world to be bolder and dream bigger every day."

The cause of death was not released.

The Strasburg native born in 1948 is known for creating designs for women that exude strength and elegance, with wide shoulders and sharp lines.

He was responsible for helping to establish the look of the 1980s, involving materials such as latex and leather, The New York Times reported.

His work has donned the bodies of some of the world's most famous celebrities, including David Bowie with whom he had a long standing working relation.

"The Man Who Sold The World" singer even wore one of Mugler dresses during an appearance on "Saturday Night Live" in 1979. Mugler also designed the tuxedo Bowie wore during his 1992 wedding to model Imam, Rolling Stone reported.

From the 1970s until he left his brand in 2002, Mugler established himself as "one of the most daring and innovative couturiers of his times, creating silhouettes of remarkable potency often hailed as the embodiment of the 1980s through the lens of fashion," the Montreal Museum of Fine Arts said on its webpage for "Thierry Mugler, Couturissime," a retrospective of his work that has been on display since 2019.

The Montreal Museum of Fine Arts called him "an exceptional designer, a visionary who revolutionized fashion."

After leaving his brand he continued to work and created the Cirque du Soleil show in Las Vegas called Zumanity that ran until the pandemic hit in 2020, The Times reported.

His work has seen a resurgence of late with its appearance on celebrities such as Cardi B, Beyonce and Kim Kardashian.

After she wore the dress of latex and crystals that Mugler made for her to the Met Gala in 2019, Kardashian gushed online.

"Mr. Mugler hasn't designed in 20 years & made me the most magical dripping wet dress," she tweeted at the time. "I have to pinch myself."

"I will miss you, Thierry Mugler," she said, posting a picture of herself with the designer, "this was a wonderful time in our lives."

Music // 3 minutes ago
Lizzo documentary in the works at HBO Max
May 18 (UPI) -- "About Damn Time" singer Lizzo is the subject of a new documentary about her life and music.

TV // 1 hour ago
Sacha Baron Cohen to narrate 'Chelm' animated comedy special
May 18 (UPI) -- "Chelm: The Smartest Place on Earth," a new special from Sacha Baron Cohen and "King of the Hill" creators Greg Daniels and Mike Judge, is coming to HBO Max.

Movies // 1 hour ago
'Disenchanted': Amy Adams, Maya Rudolph appear in photo for 'Enchanted' sequel
May 18 (UPI) -- "Disenchanted," a sequel to "Enchanted" starring Amy Adams and Maya Rudolph, is coming to Disney+ in November.