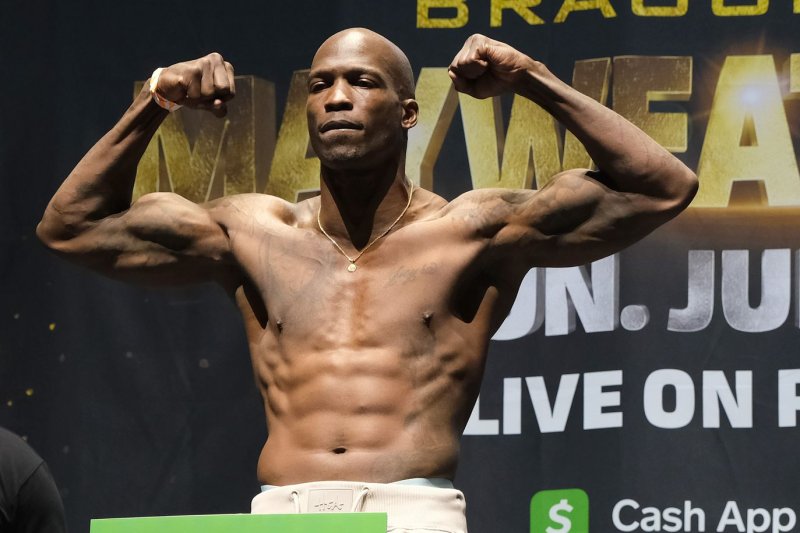 Chad Johnson attends the official weigh-in for an exhibition fight at the Seminole Hard Rock Hotel and Casino on June 5. Johnson has announced the birth of a baby girl with his fiancée Sharelle Rosado. File Photo by Gary I Rothstein/UPI | License Photo

"Just delivered Serenity 'Hurricane' Paula Johnson. (I still have 2 lash slots available for January)," Johnson said on Instagram Sunday alongside a photo of himself cutting the baby's umbilical cord.

Rosado, 33, had her pregnancy showcased on Netflix's Selling Tampa Season 1, which was launched in December. The show captured the moment that Rosado told Johnson that she was pregnant.

Selling Tampa is a spinoff of Selling Sunset that follows Rosado leading an all-Black, all-female team of real estate agents.

Johnson famously played for the Cincinnati Bengals and competed on Season 10 of Dancing with the Stars.

Entertainment News // 9 hours ago
BET Awards: How to watch, what to expect
June 24 (UPI) -- The 22nd annual BET Awards will take place Sunday at Microsoft Theater in Los Angeles.

TV // 10 hours ago
'Obi-Wan' actress Moses Ingram joins Apple TV+ series 'Lady in the Lake'
June 24 (UPI) -- Moses Ingram, who plays Reva in "Obi-Wan Kenobi," will star with Natalie Portman in a new series based on the Laura Lippman novel "Lady in the Lake."

Music // 10 hours ago
Giveon releases debut album, 'Lost Me' music video
June 24 (UPI) -- Giveon released his debut studio album, "Give or Take" and a music video for the song "Lost Me."

John Early: 'Would it Kill You to Laugh?' is 'timeless and silly'