Oct. 12 (UPI) -- Dylan Dreyer says her son Calvin was a valuable "co-editor" on her first book.

The Today meteorologist appeared on the show Tuesday to discuss her children's book, Misty the Cloud: A Very Stormy Day, following its release.

Misty the Cloud follows the titular Misty, a girl whose bad mood turns into a thunderstorm. Dreyer wrote the book to help children understand and navigate their feelings.

Dreyer has three sons, Calvin Bradley, 4, Oliver George, 21 months, and Russell "Rusty" James, 2 weeks, with her husband, Brian Fichera. On Today, Dreyer said she used Calvin as a sounding board during the writing process.

"He helped me write the whole thing," she said. "Anything he didn't understand, we changed it. Anything he thought was funny, we kept in the book. He was kind of my co-editor on this whole thing."

Misty the Cloud is illustrated by Rosie Butcher and was released Tuesday.

We're checking in with our very own @DylanDreyerNBC about life with her new baby, Russell James Fichera, and her new children's book, "Misty the Cloud: A Very Stormy Day." pic.twitter.com/3Z6FxtbcCm— TODAY (@TODAYshow) October 12, 2021

"Rusty is a dream," she said. "He makes Ollie look so difficult because this baby literally just sleeps and eats all day long."

Dreyer said Calvin is "absolutely obsessed" with his new brother.

"It's hard to find a picture where Calvin isn't hugging him or kissing him or laying on top of him," she said. "It's just been a really, really special time."

Dreyer shared a photo on Instagram of herself holding baby Rusty in September.

TV // 27 minutes ago
'The Lost Symbol': Peacock cancels series after one season
Jan. 25 (UPI) -- "The Lost Symbol," an action-adventure series based on the Dan Brown novel, won't return for a second season at Peacock. 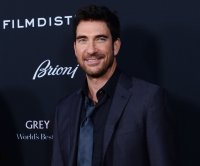 Movies // 5 hours ago
Sundance movie review: 'Summering' is a winner for both kids and adults
LOS ANGELES, Jan. 25 (UPI) -- "Summering," which premiered virtually at the Sundance Film Festival, is about four girls approaching middle school who have one last summer adventure. The film itself should appeal equally to kids and grown-ups.
Advertisement