Twice to perform 'The Feels' on 'The Tonight Show'

The K-pop stars will perform their song "The Feels" during the Oct. 1 episode of the NBC late-night show.

The Tonight Show shared the news Thursday alongside a video of Twice.

"The Feels" is Twice's first English-language song. The group will release a single and music video for the song Oct. 1, the same day as its Tonight Show performance.

Twice shared a "fashion change" teaser for the song earlier this month and a release schedule for the single Thursday. The group will share concept photos for the song this week. 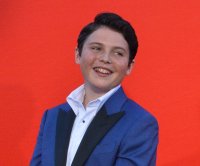