The 48-year-old actress recently got engaged to her boyfriend, film producer and hotel developer Peter Glatzer.

Rohm shared the news Wednesday on Instagram alongside a photo of herself with Glatzer. In the picture, Rohm and Glatzer share a sweet moment as Glatzer shows off Rohm's engagement ring.

"So happy to share with you guys that @glatzerama and I are engaged," Rohm captioned the post.

Law & Order: SVU alum Diane Neal and actresses Gabriella Wright and Kelly Hu were among those to congratulate Rohm in the comments.

"So happy for you both," Wright added.

Glatzer posted the same photo on his own account.

"It's official!" he wrote, adding a heart and clinking champagne glasses emoji.

Rohm confirmed her engagement in a statement to People.

"We've been together for almost a year and look forward to celebrating our love and commitment to each other this winter," Rohm said. "We now live together in Beachwood Canyon."

Glatzer proposed to Rohm on the rooftop of a hotel in Santa Barbara, Calif.

"We went to the rooftop of the hotel, where the views were beautiful and I played it cool while some people left the area. Then, when I couldn't take it anymore, I dropped down on one knee," he said.

Rohm is known for playing Kate Lockley on Angel and Serena Southerlyn on Law & Order. She most recently appeared in the Lifetime movie Sleeping with Danger. 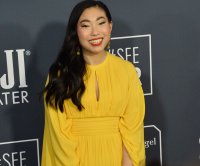 Movies // 16 hours ago
'Shang-Chi' tops the North American box office for 4th weekend
Sept. 26 (UPI) -- "Shang-Chi and the Legend of the Ten Rings" is the No. 1 movie in North America for a fourth weekend, earning an additional $13.3 million in receipts, BoxOfficeMojo.com announced Sunday.