Maya Erskine and Anna Konkle discussed how they became pregnant and gave birth within two months of each other. File Photo by Jim Ruymen/UPI | License Photo

Erskine and Konkle, both 34, appeared on Tuesday's episode of Jimmy Kimmel Live!, where they discussed how they became pregnant and gave birth within two months of each other.

"It actually is the best to have a friend, a best friend, go through it at the same time," Erskine added. "I feel bad though, because she's two months ahead of me."

Erskine and Konkle said their children have since met and formed a special connection.

"They met a few days ago for the first time, because we finally got vaccinated. It was really special," Konkle said.

Konkle has a daughter, Essie, while Erskine has a son, Leon. Konkle and Erskine discussed the possibility of their children eventually falling in love.

Erskine and Konkle co-created and star on the Hulu series Pen15. Hulu released Season 2, Part 1 in September and has yet to announce a release date for Part 2. 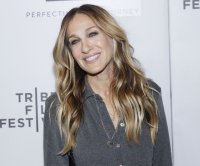