The 42-year-old actress is expecting her third child with her husband, Brian Hallisay.

Hewitt shared the news Tuesday on Instagram alongside a photo of herself holding up a positive pregnancy test.

"Oh baby! We have another one on the way. So excited to finally share this news with all of you," she captioned the post.

Actresses Beverley Mitchell, Lindsay Price and Jenna Fischer were among those to congratulate Hewitt in the comments.

Hewitt and Hallisay married in November 2013 and have two children, daughter Autumn, 7, and son Atticus, 5.

In a statement to People, Hewitt said her pregnancy came as a welcome surprise.

"We had always been open to a third, but definitely didn't think in the crazy year that the entire world was having that it would be necessarily be this moment," she said. "I feel like we've been able to so far raise two really special kids who will be great role models. This has been such a pleasant, beautiful, surprising gift in this time to be able to get to do all that again with another little human."

Hewitt is known for the films I Know What You Did Last Summer and Can't Hardly Wait. She plays Maddie Kendall on the Fox series 9-1-1, which is in the midst of its fourth season.

Entertainment News // 1 hour ago
Meghan McCain says she was 'bullied' out of job at 'The View'
Oct. 21 (UPI) -- Meghan McCain discussed her exit from "The View" ahead of the release of her tell-all audio memoir, "Bad Republican." 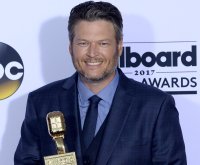 TV // 1 hour ago
BBC offers first look at David Tennant, Stanley Tucci in 'Inside Man'
Oct. 21 (UPI) -- The BBC has released the first images from its upcoming miniseries, "Inside Man."

TV // 1 hour ago
Issa Rae recalls advice given for 'Insecure' finale: 'Don't 'Game of Thrones' it'
Oct. 21 (UPI) -- Issa Rae discussed ending her HBO series "Insecure" with its fifth and final season while appearing on "The Late Show with Stephen Colbert."