May 17 (UPI) -- Bachelor alum Haley Ferguson is engaged to be married.

The television personality got engaged to her boyfriend, Finnish professional hockey player Oula Palve, over the weekend.

"Ikuisesti," she wrote, which means "forever" in Finnish. "I am ENGAGED to the man of my DREAMS! @oula7 thank you for choosing me. Will I ever stop crying/smiling... probably not!"

Fellow Bachelor alums Lauren Burnham, Becca Tilley and Carly Waddell were among those to congratulate Ferguson in the comments.

"Omg how cute are you two so excited for you!!" Burnham wrote.

Ferguson and Palve confirmed their relationship on Instagram in January 2020.

Ferguson and her twin sister, Emily Ferguson, came to fame as contestants in Ben Higgins' season of The Bachelor. The sisters later starred in Bachelor in Paradise Season 3, with Ferguson also appearing in Seasons 4 and 6.

TV // 1 hour ago
John Cena says he will return to WWE: 'I haven't had my last match'
June 24 (UPI) -- John Cena confirmed that he will be returning to WWE while appearing on "The Tonight Show Starring Jimmy Fallon."

Entertainment News // 2 hours ago
Blink-182's Mark Hoppus announces he has cancer: 'Trying to remain hopeful'
June 24 (UPI) -- Mark Hoppus of Blink-182 has announced that he has cancer and has been undergoing chemotherapy for the past three months.

Entertainment News // 2 hours ago
Netflix: What's coming and going in July 2021
June 24 (UPI) -- "Gunpowder Milkshake," "Fear Street" and new seasons of "Atypical," "Never Have I Ever" and "Outer Banks" are headed to Netflix. 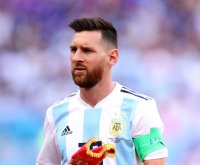 TV // 6 hours ago
Nathanya Alexander: 'Genera+ion' episodes reveal Arianna's vulnerable side
LOS ANGELES, June 24 (UPI) -- "Genera+ion" star Nathanya Alexander describes the upcoming struggles for her teenage character, and the homework she did to elaborate on her role.

Music // 19 hours ago
TXT brings in pH-1, Woodie Gochild for '0X1=Lovesong' remix
June 23 (UPI) -- South Korean boy band TXT announced on Wednesday that pH-1 and Woodie Gochild will be joining them on the remix to "0X1=Lovesong (I Know I Love You) Remix" featuring Seori.
Advertisement