Hawn, 75, and Hudson, Hawn's daughter with her ex-husband Bill Hudson, marked the occasion Wednesday by posting loving tributes to Russell on Instagram.

Hawn has been in a relationship with Russell since 1983 and has one child, son Wyatt Russell, with the actor. Hawn also has a son, Oliver Hudson, with Bill Hudson.

On Instagram, Hawn shared a throwback video of herself and Russell joking about never getting married.

"Happy birthday baby! What a wild ride. No, we never got married but one thing that continues to grow is our love. You're a wild one, brilliant, lovable, childlike, perfectly maddening, a father supreme and deeply funny!" the actress captioned the post.

"I can't imagine my life without you at any age, Kurt Russell. You're the catch. And you're all mine," she said.

Hudson posted a throwback photo on her own account that showed her with Russell, Hawn, Oliver Hudson, Wyatt Russell and Boston Russell, Russell's son with Season Hubley.

"I'm gonna gush cause I don't often about this man but I figure since today he turns 70 I'm gonna let it out. Plus he'll never see this," Hudson wrote. "I often wonder how how different our life would have been if he never entered the picture. How different I would be. Let me fill you in."

"He has taught me that we can all exist with immense love through our differences. And his dedication to my mother and their fight for love forever is as admirable as it gets. I love this man so much!" the star said.

"A note for all dads of girls. He gave me the gift of confidence instilling a knowingness in me that I deserved everything I worked for and I knew that he's always have my back in whatever challenges may lay ahead," she added. "When you have a dad who gives you permission to be confident you live courageously."

"Happy Birthday Pa. How bout we give some big Hip Hip Hoorays to this wild man!" she said.

Hawn and Russell recalled on The Ellen DeGeneres Show in November how they fell in love on the set of the 1984 film Swing Shift. Hawn said Russell impressed her with how good he was with her kids.

"I remember about Kurt -- not only being really sexy and handsome and all that stuff and fun and whatever, a good co-star -- I loved the way he looked at my children. It was really something special," Hawn said.

Hawn previously discussed in an interview with Porter magazine why she and Russell never married.

"A lasting relationship isn't about marriage," the actress said. "It's about compatibility and communication. And you both need to want it to work. If one person does not want it work, it isn't going to work."

Kurt Russell turns 70: a look back 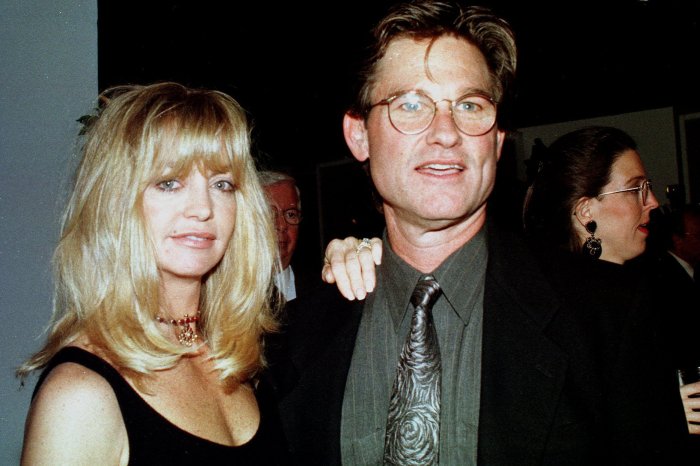 Goldie Hawn (L) and longtime partner Kurt Russell attend the opening night party for the revival production of the Broadway musical "Little Me" in New York City on November 12, 1998. The couple, who has been together since 1983, never married, and have one child together. They reflected on their relationship in 2020. Photo by Ezio Petersen/UPI | License Photo

Halle Berry shares rare photo of daughter on her 13th birthday Britney Spears, Joe Exotic documentaries in the works at BBC Two Hulu: What's coming and going in April 2021 What to watch next: Sign up for UPI's Streaming newsletter

Entertainment News // 1 hour ago
Madonna calls out 'ageism and misogyny' after Grammys appearance
Feb. 8 (UPI) -- Madonna responded to criticism of her "new face" at the Grammy Awards.