The 31-year-old singer and actor marked the occasion Sunday by sharing candid photos of Turner, an actress, on Instagram.

Jonas showed Turner's "two moods" in the playful post. In one photo, Turner wears a fashionable ensemble and sunglasses, while another photo shows her wearing a sweatshirt with the hood up and her ear exposed.

"Happy Birthday babe. You have two moods and I love them both equally love you @sophiet," Jonas captioned the post.

Turner responded in the comments.

Jonas' brother Nick Jonas and his wife, actress Priyanka Chopra, both wished Turner a happy birthday on Instagram Stories. Nick Jonas appeared to share a photo from his 2018 wedding to Chopra in India.

Jonas and Turner married in Las Vegas in May 2019 and celebrated again with family and friends at a second wedding in France that June. Turner said in the April issue of Elle magazine that being married to Jonas gives her an extra "sense of security."

"Just the word husband the word wife -- it just solidifies the relationship," the actress said.

"I love being married. I think it's wonderful," she added. "I'm sure we'll have our hiccups and our different things. But right now, it's like the security and the safety is everything."

Turner is best known for playing Sansa Stark on the HBO series Game of Thrones, while Jonas and his brothers Nick Jonas and Kevin Jonas perform as the pop group Jonas Brothers.

Wilmer Valderrama celebrates baby girl's birth Brandy, Monica recreate 'The Boy is Mine' in TikTok video Pamela Anderson discusses 'beautiful, quiet' wedding in interview from bed What to watch next: Sign up for UPI's Streaming newsletter 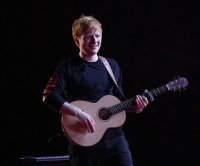