The 62-year-old actress discussed on Wednesday's episode of The Tonight Show starring Jimmy Fallon how she first met Boseman, who died in August, while he was a student at Howard University.

Bassett received an honorary doctorate degree from Howard University in 2000.

"I go there, it was a great time, a great experience, whatever. You know, life goes on, you go back to doing your work," she said.

Years later, Bassett and Boseman were cast as Queen Ramonda and T'Challa, aka Black Panther, in Black Panther. The pair shared a hair and makeup trailer while filming the movie in 2017 and spent "hours and hours" together on set.

On the night of Black Panther's "glorious premiere," Bassett said Boseman surprised her by reminding her they had previously met.

"We're getting ready to leave. Let me go say hello, and I find him and give him an embrace. It's just been incredible," she said. "And he whispers in my ear. He said, 'When you got your honorary degree, I was the student that escorted you throughout that day.'"

Bassett said she was "blown away" by Boseman's revelation.

"I couldn't believe that he held that back from me until this very moment," the actress said. "While we were shooting, yeah, the entire time. But he finally, he shared that."

"And, you know, so many times you meet young people and they said, 'Oh, I want to work with you one day.' And you know that, you know, you say, 'Yeah, I hope so too.' But you know how rare that can be," she added. "But we actually did."

"This young man's dedication was awe-inspiring, his smile contagious, his talent unreal. So I pay tribute to a beautiful spirit, a consummate artist, a soulful brother... 'thou aren't not dead but flown afar,'" she wrote. "All you possessed, Chadwick, you freely gave. Rest now, sweet prince."

Bassett plays Athena Grant on the Fox series 9-1-1, which will return for a fourth season next week. 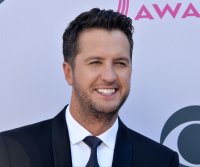 Movies // 12 hours ago
'Godzilla vs. Kong' wins box office for 3rd weekend with $7.7M
April 18 (UPI) -- "Godzilla vs. Kong" is the No. 1 movie in North America for a third weekend, earning an additional $7.7 million in receipts, BoxOfficeMojo.com announced Sunday.