O'Brien said Roberts died after being hospitalized for complications from a UTI that spread to her kidneys, liver and gallbladder before it "got into her blood."

Roberts reportedly collapsed Dec. 24 after walking her dogs near her Hollywood Hills home.

Roberts started her career as a model and gained fame after being cast as Julie Rogers in the fifth and final season of the Charlie's Angels series, which started airing in 1980. The ABC series starred Farrah Fawcett, Kate Jackson, Jaclyn Smith and Cheryl Ladd.

Roberts went on to star as Stacey Sutton, a geologist, in the 1985 James Bond film A View to Kill. The movie marked Roger Moore's last appearance as Bond.

TV // 1 hour ago
Alexa Swinton joins 'Sex and the City' reboot at HBO Max
July 27 (UPI) -- Alexa Swinton will play Rose Goldenblatt, the daughter of Charlotte York (Kristin Davis), on the HBO Max series "And Just Like That..."

TV // 2 hours ago
'Drag Race Holland' introduces new queens for Season 2
July 27 (UPI) -- "Drag Race Holland" is showcasing the new drag queens who will be competing on Season 2 of the reality series. 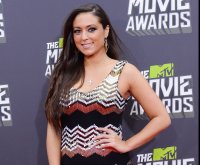