Jana Kramer, Mike Caussin celebrate his 'most sober year' yet

Jana Kramer and her husband, Mike Caussin, are celebrating his "most sober year" yet.

Kramer, 37, shared a message from Caussin, 33, Monday on Instagram, in which Caussin reflects on the progress he's made since his cheating scandal and going public about his sex addiction.

"As an addict I carry a lot of shame. Others who share a similar disease can relate. We rarely like to speak about it let alone acknowledge it. But this Thursday I celebrate the most sober year of my entire life," Caussin wrote.

"I've had my stumbles and falls over the last four years in this program but this year has finally been different. None of that has been possible without finally allowing myself to lean into others, lean into my wife and lean into God," he added. "This isn't a post for attention, sympathy or congrats. It's a post to express humility and acknowledge that we don't have to go through life alone."

Caussin said he's learned how to be vulnerable and allow others to help when it's needed. He encouraged others to "lean into each other a bit more" in the new year.

"It's our choice whether we want to live divided or together. So given that choice why would you want to be divided?' he said. "We are all different and thats what makes us the breathing miracles we are. Let's choose to embrace that in 2021."

Kramer and Caussin married in May 2015 and have two children, daughter Jolie Rae, 4, and son Jace Joseph, 2. Caussin apologized to Kramer in 2016 amid allegations he cheated.

Caussin previously said in March 2019 that he was one year sober after struggling with a sex addiction. Kramer said on Watch What Happens Live in October that she sometimes regrets sharing her marriage struggles publicly.

"There are times when I definitely regret it, just because I recently got a DM in my Instagram saying my husband cheated on me again. Getting those things kind of freaks me out at first, but I think in the end I'm happy because I do know we have helped people see the silver lining," the actress said.

"Marriages are work, and it takes two people, and it's really hard. But if you keep fighting, and if two people are willing to fight, you can get through it," she added.

Kramer and Caussin said on Instagram in July that their relationship is stronger than ever, four years after Caussin's affairs.

Kramer is a singer and actress who played Alex Dupre on the WB/CW series One Tree Hill, while Caussin is a former professional football player.

Music // 43 minutes ago
TXT brings in pH-1, Woodie Gochild for '0X1=Lovesong' remix
June 23 (UPI) -- South Korean boy band TXT announced on Wednesday that pH-1 and Woodie Gochild will be joining them on the remix to "0X1=Lovesong (I Know I Love You) Remix" featuring Seori. 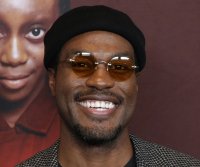