Nov. 30 (UPI) -- Chef David Chang won for charity the $1 million grand prize on ABC's Who Wants to Be a Millionaire.

The restaurateur used a lifeline and phoned his friend Mina Kimes to help answer the final question, which asked about the first U.S. president to have electricity in the White House.

Chang went for Kimes' suggestion that it's probably Benjamin Harrison and won the game. A wrong answer would have left Chang with $32,000, host Jimmy Kimmel explained.

Chang is donating the $1 million to the Southern Smoke Foundation, which provides funding to individuals in the food and beverage industry who are in crisis. 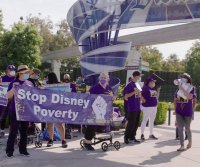 TV // 5 hours ago
'Bel-Air' teaser reimagines 'Fresh Prince' series as a drama
Jan. 26 (UPI) -- Newcomer Jabari Banks has his life flipped-turned upside down in the new teaser trailer for "Bel-Air," a dramatic reimagining of "The Fresh Prince of Bel-Air."