What to stream this weekend: 'Haunting of Bly Manor,' 'Right Stuff'

Oct. 9 (UPI) -- The Haunting of Bly Manor brings more horror to Netflix, The Right Stuff about NASA's first manned space program premieres on Disney+ and Fear the Walking Dead returns for Season 6 on AMC this weekend.

In addition, WWE holds their annual draft between Raw and SmackDown, Radha Blank wants to move from theater to being a rapper in The Forty-Year-Old Version and The Graham Norton Show is back with in-studio episodes on BBC America.

Here's a rundown of some of the films, TV shows and concerts that will be released this weekend.

Radha Blank directed, wrote, produced and stars in comedy The Forty-Year-Old Version, which comes to Netflix on Friday. Blank is a down-on-her-luck playwright who wants to reinvent herself as a rapper.

Ginny (Yami Gautam) is set up with Sunny (Vikrant Massey) by her matchmaker mother, but turns him in down in this romantic comedy that comes to Netflix on Friday. Sunny then teams up with Ginny's mother to win her over.

'The Haunting of Bly Manor' -- Netflix

Netflix's Haunting of ... anthology series continues Friday with the release of The Hunting of Bly Manor on Friday. Victoria Pedretti is hired as a new governess at a British country estate in 1987. She soon realizes that something is terrifyingly wrong with the kids. Henry Thomas, Oliver Jackson-Cohen, T'Nia Miller, Rahul Kohli, Amelia Eve, Amelia Bea Smith and Benjamin Evan Ainsowrth star.

Deaf U, a documentary series premiering on Netflix Friday, follows a group of students as they attend Gallaudet University, a private college for the deaf and hard of hearing. Model, actor and deaf activist Nyle DiMarco serves as executive producer.

Disney+ is releasing on Friday a new adaptation of The Right Stuff from National Geographic about NASA's first manned space program. Patrick J. Adams, Jake McDorman and Colin O'Donoghue start as three test pilots who made up astronaut team the Mercury 7.

A new season of The Graham Norton Show will premiere with in-studio episodes Friday on BBC America at 11 p.m. EDT. The new season will have a mix of in-studio and virtual guests. Dolly Parton and Riz Ahmed will appear remotely Friday, while Rupert Everett, Sara Pascoe and Roisín Murphy appear in studio.

The spy racers return for a new mission in Rio de Janeiro, Brazil, in Fast & Furious: Spy Racers Season 2, which hits Netflix on Friday. The spy racers crew will be outfitted with new stealth car mods and undercover identities as they speed through Brazil.

WWE presents the first night of their annual draft between Raw and SmackDown Friday on Fox at 8 p.m. EDT. Bayley will defend her SmackDown Women's Championship against former best friend Sasha Banks and The Fiend Bray Wyatt will emerge to take on Kevin Owens.

The second half of Starz's historical drama The Spanish Princess premieres Sunday at 8 p.m. EDT. Queen Catherine (Charlotte Hope) and Henry VIII (Ruairi O'Connor) are successfully ruling over England until her position is threatened by being unable to produce an heir.

Fear the Walking Dead Season 6 kicks off Sunday at 9 p.m. EDT. Morgan (Lennie James) is still alive, but in rough shape in the season premiere and must decide whether to help a desperate stranger.

Entertainment News // 1 hour ago
Fetty Wap honors late daughter: 'I love to you the moon and back'
Aug. 4 (UPI) -- Fetty Wap paid tribute to Lauren Maxwell, his daughter with Turquoise Miami, who recently died at age 4. 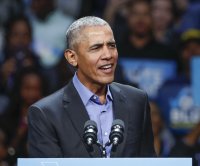