Mariah Carey says experience with racism has been 'lifelong battle'

Mariah Carey says experience with racism has been 'lifelong battle'

Oct. 9 (UPI) -- Mariah Carey says her experience with racism has been a "lifelong battle and struggle."

The 50-year-old singer discussed her biracial heritage and how she's encountered racism since she was a child during Thursday's episode of Watch What Happens Live.

Carey also shares her experience in her new memoir, The Meaning of Mariah Carey, released in September. On WWHL, Carey said racism has been a struggle for her since she first became aware of race.

"The only reason I was aware so early on is because it became a subject of humiliation for me as a child," she said. "In the book, in the chapter 'Coloring Outside the Lines,' when I drew a picture of my family ... and basically got traumatized by the student teachers who thought I had used the wrong crayon because I drew my father with a brown crayon."

Carey also recalled her childhood friend's reaction to meeting her dad, who is Black, for the first time.

"I brought my friend Becky to my dad's house with me, and her parents didn't know I was Black. They didn't know she was going to go to a Black man's house; they had only met my mother," she said. "The girl burst into tears because she was so freaked out."

Carey said such experiences had a huge impact on her as a child.

"It just changes your perspective on things, and it twists it," she said. "I really feel like it's been a lifelong battle and struggle."

Carey also discussed her past relationship with retired baseball star Derek Jeter. She said their shared biracial heritage was "the main thing" that drew her to the former New York Yankees player.

"I talk about it in the book, because what it is, is that just knowing there was somebody else out there that was like me. Because I did feel so ambiguous and like such an outsider, and yet, I was living my dream. But I didn't feel really connected to anybody," the singer said.

"He became a catalyst for me, because all my life when I was little girl, I was like, 'One day maybe I'll meet somebody that's similar to me that won't ... look down upon me because they feel superior to me because I'm not one way or another enough for them," she added. 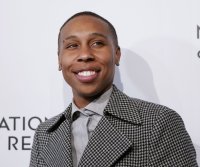 TV // 15 hours ago
'The Chi': Showtime renews drama series for Season 5
Aug. 2 (UPI) -- "The Chi," a series created by Lena Waithe and starring Jacob Latimore, Michael V. Epps and Alex Hibbert, will return for a fifth season on Showtime.