Aug. 28 (UPI) -- Christina Aguilera is back with a new music video.

The 39-year-old singer and actress released a video Friday for her new version of "Reflection," a song for Disney's live-action remake of Mulan.

The video, directed by Mulan director Niki Caro, shows Aguilera wearing a blue dress and performing against a black background. It also features scenes from the remake, starring Liu Yifei as Mulan.

Aguilera recorded the original "Reflection" for Disney's 1998 animated version of Mulan. She celebrated the new version's release in an Instagram post Friday.

"I am at a place of new beginnings in my life and set out to embrace the woman I've become, having grown up in this business, till now," the star wrote.

"So this song always resonates and represents exciting and new chapters & energy for me. I hope you enjoy this fresh new take of Reflection," she said.

Aguilera also recorded the new song "Loyal Brave True" for the remake. She released a music video for the song earlier this month.

Mulan was originally to open in theaters in March but was delayed due to the coronavirus (COVID-19) pandemic. The movie will now be released Sept. 4 as a rental for $29.99 on Disney+.

Christina Aguilera shares video for 'Loyal Brave True' from 'Mulan' Katy Perry celebrates 'Smile' release from her hospital bed Amber Riley performs 'A Moment' in memory of Naya Rivera What to watch next: Sign up for UPI's Streaming newsletter

TV // 14 minutes ago
Andrew Garfield, Daisy Edgar-Jones to star in FX limited series
June 25 (UPI) -- FX has announced it ordered a limited series based on Jon Krakauer's book, "Under the Banner of Heaven." 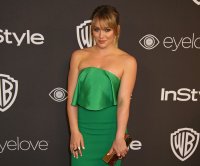 TV // 18 hours ago
Amy Poehler, Nick Offerman open to more 'Parks and Rec': 'We'll do it anytime'
June 24 (UPI) -- Amy Poehler and Nick Offerman discussed "Making It" Season 3 and the possibility of more "Parks and Recreation" on "Today."
Advertisement