And a massive thank you to all the nurses and doctors. Some of the nicest people I have ever met. Stay safe everyone Simon.— Simon Cowell (@SimonCowell) August 10, 2020

Aug. 10 (UPI) -- Simon Cowell thanked fans for their support and the medical staff who cared for him on Twitter after the music producer underwent surgery following a bike accident.

The America's Got Talent judge was hospitalized on Saturday. Cowell injured his back after testing out a new electric bike at his home in Malibu, Calif., with his family.

"Some good advice...If you buy an electric trail bike, read the manual before you ride it for the first time. I have broken part of my back. Thank you to everyone for your kind messages," Cowell tweeted on Sunday.

"And a massive thank you to all the nurses and doctors. Some of the nicest people I have ever met. Stay safe everyone. Simon," the 60-year-old continued.

Cowell's Syco Entertainment confirmed to USA Today that the television personality broke his back in several places. He underwent six hours of surgery and had a metal rod placed in his back.

NBC has said that Cowell will not appear in the first two live episodes of America's Got Talent Season 16, which are airing on Tuesday and Wednesday.

Simon Cowell undergoes surgery after breaking back in bike mishap Blake Lively recalls 'intense' injury on 'Rhythm Section' set What to watch next: Sign up for UPI's Streaming newsletter 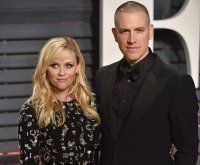 TV // 50 minutes ago
'Arthur': PBS Kids series to end after Season 25
July 28 (UPI) -- "Arthur," an animated children's series based on the Marc Brown book series, will conclude with a final season premiering in 2022.